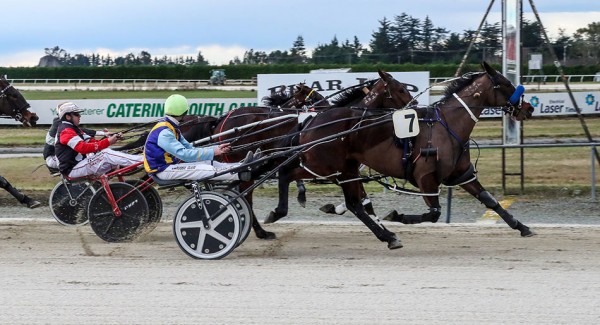 After Michael Case and his family bred their mare Carania to Terror To Love naming the foal was a no-brainer – he was called “Terry”. Plain and simple.

He’s turning into a very useful horse too. He has won four from 13 for trainer Regan Todd, including the Timaru Winter Cup in June, and a R60-80 at Addington against the likes of Kruizr, Johnny Mac, Deus Ex and American Sniper.

“He’s been back after a spell for three weeks, and we hope we could have something special there.”

Now Terry’s brother, who's actually called Terry's Brother, is about to hit the race track. As long as Covid protocols allow, he will race at Addington on Sunday in the Hydroflow Mobile Pace, Race 6, 4,43pm.

Also by the three-time NZ Cup champion out of Carania, the now three-year-old gelding has seven hit-outs in preparation for his debut.

“He goes alright,” says Case, “though he has had some trouble with his gait, so you never really know.”

And yes there is an unraced filly from the same family, who is called Terry’s Sister. True story.

“She’ll get going as a late three-year-old.”

Excuse the pun, but it’s all a bit hard Case.

“I used to call him Terry,” says Michael Case of the now four-year-old, “and then when it came to giving him a name we thought well why not call him Terry, and it stuck.”

Then it was decided to take it a step further.

“With Terry’s Brother – we thought it made sense, and then Mum said why don’t we go with Terry’s Sister as well when she came along.”

Michael followed his parents Gavin and Margaret into the racing game, with the family also being involved in the market garden business in Christchurch for around half a century.

Their best horse was open classer Smooth Trickster, who won 12 from 35 for trainers Cran Dalgety and then Warren Stapleton. He was twelfth in the 2001 New Zealand Cup won by Kym’s Girl and won the Winter Cup at Addington in the same year.

He was by Cam’s Trickster out of the Cases' first mare Silky Princess.

The same breeding combination produced one race winner Carania, who was retired to the broodmare paddock in 2004. She’s had nine foals so far.

“We’ve put her to Christian Cullen, Elsu, In the Pocket.”

But Terror To Love is her go-to right now. After having Terry, Terry’s Brother and Terry’s Sister another sibling is already being planned, with Carania due to go back to Pinelea Farm.

As for what his or her name will be?