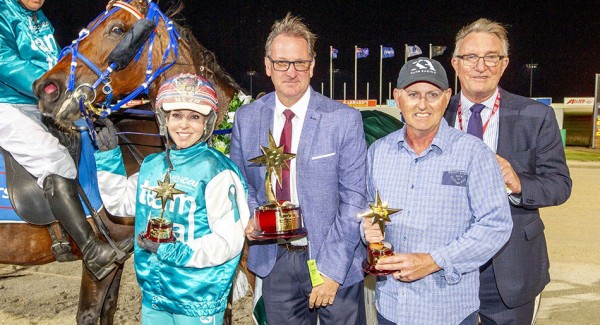 A rollercoaster of emotions ended with Andy and Kate Gath continuing their amazing dominance in Australia’s biggest trotting race.

For the third successive year and the fourth time in the past six years, Team Gath won the $300,000 Group 1 Great Southern Star.

This time it was the brilliant Majestuoso, who made the most of a good draw (gate four) in the final to lead throughout and stave-off former star juvenile Wobelee to win by a head in a record-breaking 1min54.6sec mile rate for 1720m.

But the drama started way beyond the final.

Majestuoso was favourite to lead throughout from gate two in his heat, but was crossed early by Aldebaran Crescent and Aldebaran Revani from wide draws. As much as Gate tried, she was buried three back on the pegs and in a world of pain when Aldebaran Revani started to tire from the 500m.

She weaved through traffic late to grab fourth spot and only qualified for the final by being one of the two fastest unplaced runners in the two heats.

“I wouldn’t want that over again,” Kate Gath said. “I wasn’t looking good for a while. I had plenty of horse but nowhere to go. Luckily some gaps appeared late and I got through near the inside to make some ground.”

Veteran Kiwi trotter Temporale, on loan to Brent Lilley, showed glimpses of his career-best form with a blazing performance to win Majestuoso’s heat in scorching time with Greg Sugars aboard.

The most amazing run of the heats came from Anton Golino’s gifted mare Im Ready Jet, who galloped at the start, came around the field and ran second in a 1min54.6sec mile to Temporale. Temporale was fifth in the final.

It came after Team Gath’s veteran champion Tornado Valley, winner of the previous two Great Southern Stars, led and was just nabbed right on the wire by the emerging Rules Dont Apply along the sprint lane.

The draw for the final was always going to be vital and Majestuoso drew inside most of his key rivals.

Kate Gath took him to the front with Wobelee stalking behind and Temporale forced to sit parked and, as he can do, getting fired-up outside the leader.

They ran the whole way with splits of 28.7 and 29.7 for the first half, but Majestuoso still ripped home in 56.7 and 27.8sec to hold-on for the biggest win of his already stellar career, which really kick-started with a Victoria Derby win.

“He’s a credit to Dad (Peter Thompson), who did all the work with him early because he was so revvy. And to Andy, who kept wanting to be patient, even though he could’ve been anything early if we’d asked him. He was almost uncontrollable early.

“Thanks to Norm (Jenkin, owner) who keeps putting the money up for these horses, we wouldn’t have them without his support.”