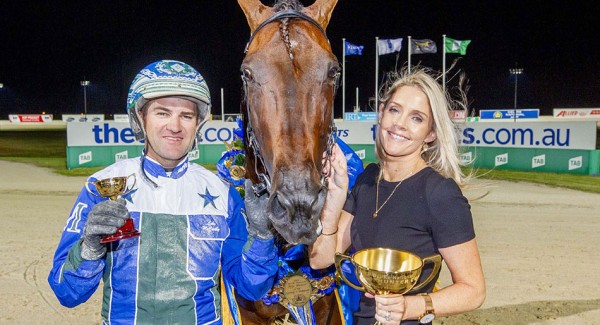 Champion pacer King Of Swing did what no horse has done for more than 25 years when he snared his second Hunter Cup victory at Melton last night.

He is the first to do so since the mighty Kiwi mare Blossom Lady went back-to-back in 1994 and ’95.

Add to the fact King Of Swing will chase an astonishing third Miracle Mile title on March 5 and his CV stacks up with the all-time greats of the sport.

“This is the one we really wanted,” trainer Belinda McCarthy said. “It’s been a bit of a frustrating run with him and he really deserved this one. We knew he was at least as good as ever.”

The race itself was predictable and little more than trackwork for King Of Swing once he led easily from the pole – just as he did in his 2020 Hunter Cup win – and driver Luke McCarthy was able to dictate through a 60.7sec middle half.

“I know I had an easy run in front, but he felt fantastic tonight,” Luke said. “He did it really easily.”

Incredibly, King Of Swing's win was his 33rd from just 36 starts when he has led in a race.

King Of Swing heads back to NSW for a Miracle Mile qualifying sprint on February 26 and then the Miracle Mile a week later.

It now seems most likely he will have a break after the Miracle Mile and finish his racing career at the Queensland Constellations Carnival during winter.

“That’s what we’re thinking. It would be a good way to go out, especially now they’ve increased the Blacks A Fake to $350,000,” Luke McCarthy said.

King Of Swing moved into seventh place on the all-time richest Australasian pacers' list at $2,786,46.

The Hunter Cup was a huge result for Team McCarthy with their emerging star Spirit Of St Louis running a mighty second and actually making ground on King Of Swing in that 25.9sec last quarter.

“He was amazing again tonight. He’s flying. I was never going to catch the winner, but we kept making ground,” driver Jack Callaghan said.

Champion Kiwi mare Amazing Dream had the gun run behind King Of Swing, but was never a hope given the tempo of the race. She was sound back in third spot.

Defending champion Lochinvar Art had to face the breeze when clearly still building towards peak fitness. He tired late for fifth, but was only 7.1m from the winner.

“The draw was crucial and it didn’t go my way. I didn’t have the horse to make it a staying test, but he’ll be fitter again for it and now we head to Sydney,” trainer-driver David Moran said.

It was Lochinvar Art’s third run back after 11 months sidelined with injury.