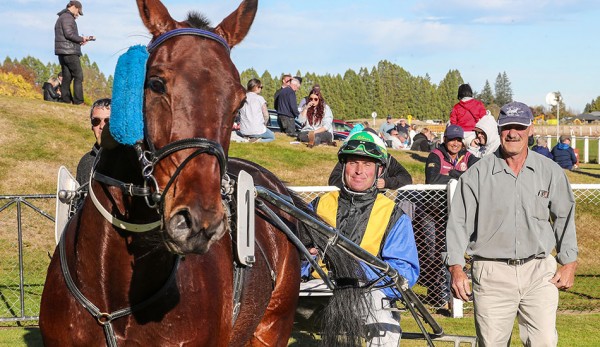 North Canterbury trainer Glenn Scott was farewelled today, a day after his best horse Take After Me had an emotionally-charged win at Methven.

Glenn’s funeral was at Kaiapoi High School this afternoon. The 50-year-old father of two died last week following a battle with cancer.

Yesterday at Mt Harding the country’s top driver Blair Orange punched the air as Take After Me emerged from the trail to run down the pace-making Call This Fun to win the Bayleys Ashburton Handicap Trot.

“It was great to get that result,” said Orange, “they are a champion family .. and Glenn was an easy-going lovely guy.”

It was the third win in 16 starts for Glenn’s father Fred Scott since he took over his son’s team this season. The others have been with Takemybreathaway who had back to back victories earlier this month.

“It is quite unbelievable,” says Fred’s wife Jan, “we have had lots of lows but this brought a lot of happiness.”

“Last night about 15 of us watched replays of the race on TV and it was very emotional.”

Included in the wider Scott family was Glenn’s youngest brother Shannon who had flown over from Townsville. He was on course with Fred to watch Take After Me’s win.

“The timing was perfect for him, if the bubble hadn’t opened up he wouldn’t have been able to get here.”

It was Take After Me’s 12th victory in 227 races. The dual gaited Holmes Hanover 10-year-old has now won eight times as a trotter to go with his four wins as a pacer.

Following today’s funeral there was a celebration of Glenn’s life at the Northern Bulldogs Rugby league club clubrooms. Glenn was president of the club until recently.

He also contributed immensely to local rugby league at a junior level, including coaching the Canterbury team to the NZRL 13s Nationals in Palmerston North in 2015.

Glenn was a recipient of a Waimakariri District Council community service award in November and was recently made a Bulldogs Life Member.

“He will be missed,” says Jan.