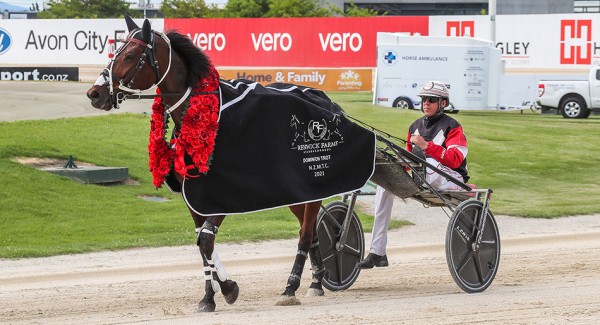 So while tonight’s $20,000 Woodlands Stud Free-For-All at Addington (7.17pm) is only the start point of a huge autumn campaign, Dunn would love to win to stamp the historic occasion.

Recently-crowned Horse of the Year,  Sundees Son goes into tonight’s 2600m standing start on $999,667 in career stakes so will join the elite millionaire’s club regardless, a remarkable achievement considering he has never raced in Australia.

With so much more racing in front of him he could well end up a $1.5 million trotter but the threshold he will cross tonight is an important one and is the main reason Dunn is driving at Addington tonight rather than Alexandra Park a week before their Derby and Oaks meeting.

“It is a big deal, even though he is going to become a millionaire whether he wins or not,” says Dunn.

“You want to win any race but I think it would be the appropriate way for him to become a millionaire.”

The two biggest obstacles to that are a wide draw, albeit not as bad it being a standing start, and outstanding rival Muscle Mountain.

Muscle Mountain twice last year and Bolt For Brilliance last start have been the two horses occasionally able to beat Sundees Son in the last 12 months, always when they have been able to get in front of him and make him chase or sit in.

If Muscle Mountain can roll to the front tonight he will again take enormous catching although trainer Greg Hope has voiced his frustration with a lead-up race being canned last week.

Had he raced then he would have a fitness advantage over Sundees Son, as Bolt For Brilliance did when he beat him on Harness Million night, but Dunn says Sundees Son is a lot fitter for tonight than he was for that clash.

“He is definitely fitter than last start when he missed a race and then a workout a week before,” says Dunn.

“He trotted really well at the trials last week and I think he is fit enough that if I want to move earlier than usual and head forward we can do that.”

If Sundees Son gets in front of Muscle Mountain he should join millionaire’s row with a win.

The Dunn stable also has Mataderos returning tonight after his booming spring campaign and he has had a minor throat operation since his close second to Sundees Son in the record-smashing Dominion in November.

“Because of that I think he will need a run or two to get back to his best.”

Dunn faces being the chaser in the open class pace tonight with Classie Brigade drawn the outside in the 1980m mobile which looks almost certain to be led by One Change in what could be a trial for a slot in The Race for the latter.

If One Change leads he will take enormous catching and Dunn realises these days all races are hard ones for Classie Brigade, especially if he can’t get to the marker pegs.

“He will go well but it will be hard to win from out there.”

The race also sees the return of A G’s White Socks having his first start since September but he looked forward at the trials last week.