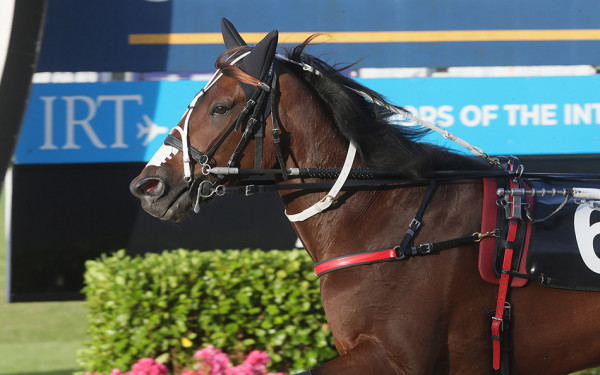 Because you get the feeling deep down inside he thinks his superstar trotter Sundees Son is ready to defend the title of New Zealand’s best trotter.

He sure looked ready when he nonchalantly sat parked outside Majestic Man to win the Lyell Creek Stakes at Alexandra Park on Friday night in national record time for the 2200m mobile.

It was remarkable stuff as Dunn seemed to be uber confident Sundees Son could sit outside a very good rival and beat him, with most importantly Sundees Son handling Alexandra Park like a pro in his first start there in 19 months.

That will be crucial come the National Trot on December 31 when the opposition goes up another level, as it will in the Flying Mile at Cambridge in December 24.

Because that is when Sundees Son will meet the pretender to his crown Bolt For Brilliance for the first time.

The latter was trotting similarly stunning sectionals winning his feature races at Alexandra Park in September and October and the pair going head to head twice in a week with Majestic Man to keep them honest could be the highlight of the entire northern summer.

But ask Dunn if he thinks Sundees Son can sit parked outside Bolt For Brilliance as regularly as he does Majestic Man and he plays the politician.

“We know how good Bolt For Brilliance is….. but then again Majestic Man is a pretty good horse in front and we beat him easy enough.”

The last statement suggests he thinks as good, maybe great as Bolt For Brilliance is, he is going to need to be something special to beat Sundees Son.

He is right. Dunn says most encouragingly Sundees Son showed no signs of losing his gait, or even wobbling, around Alexandra Park’s tricky last bend at record speed so as in this form the home track advantage may not be a huge factor for Bolt For Brilliance.

The latter goes to the workouts this week and trainer-driver Tony Herlihy is pleased with his progress.

On a night of stunning wins the feature-race fireworks were started by American Dealer who blew past his rivals to win the Alabar Classic and seal favouritism for the NZBS Harness Millions on December 31.

It was the first time he has been dominant coming from well off the speed and hard to please driver David Butcher was impressed.

“He is just a lil pro and a lovely horse to drive,” says Butcher.

“He just loves it out there, loves racing and cops it so well.

“But that was big tonight. He has gone super.”