All Stars stable beyond words after successful night

Punters may have been stunned by Beyond Words beating our best mare in the Rosslands Queen Of Hearts at Alexandra Park on Friday night but the All Stars weren’t. 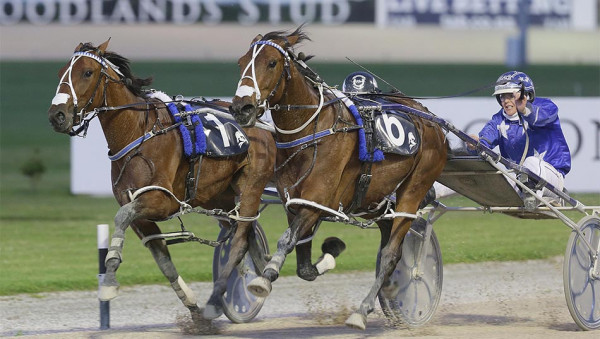 The unheralded mare headlined a wonderful night for the soon to be greatly-altered stable in which they won four races, including the Woodlands Stud Caduceus Club Classic with Bettor Twist and the Lincoln Farms Franklin Cup with Spankem.

Neither of those wins were unexpected but they were both hard fought yet the win that shocked most was Beyond Words outstaying Amazing Dream in the Group One mares race.

Having just her eighth start, Beyond Words got the lead off her stablemate mid-race as Mark Purdon, driving Amazing Dream, probably thought he would be able to outsprint her up the passing lane.

But when Amazing Dream came up the passing lane the leader held her at bay to cap a remarkable first campaign that has seen her progress from maiden on August 7 to Group One winner.

Callie’s Dream was a valuable third for her connections with a Group One placing next to her name now when she heads to the breeding barn.

For winning driver and co-trainer Natalie Rasmussen, Beyond Words’s win brought a sense of pride as much as surprise.

“I did think Amazing Dream might run her down but we have always really liked this mare,” says Rasmussen.

“When she was a two-year-old we thought she had the ability of Sweet On Me and Amazing Dream but she kept getting sore, which we later diagnosed as bruising in her bones because she was still maturing.

“Her owner Brian West was really great through that period, always agreeing to give her more time when she needed it.

“So to see her develop into such a good mare now makes us very proud.” So rapid has Beyond Words’s rise been Rasmussen sees no reason she couldn’t join Amazing Dream on a plane to Australia in the New Year to chase a Group One there and a super fast mile time around Menangle.

Amazing Dream will first head to the Auckland Cup but her defeat cost her joint favouritism for that race in which she has drifted from $2.90 to $4.

That was also due to what Spankem did 30 minutes later when he came from a 30m handicap to win the Franklin Cup, a victory that propelled him to $2.40 Auckland Cup favouritism.

He had to sprint hard late as he was three back on the outer starting the 27-second last 400m and clawed his way past Thefixer, who was good from the one-one and Ashley Locaz, who did a huge job after sitting parked the last lap.

Copy That was never a winning chance from last in the sprint home but made good ground in the last 200m and should be a different horse closer to the speed so his Cup chances are anything but over.

But Spankem has emerged as clearly the horse to beat in the big one on December 31, having the manners and also developing an outstanding Alexandra Park big race record.

“He went super because they only really sprinted that last 300m so he had to pick up some good horses,” says Rasmussen.

With Self Assured confirmed as out of the Cup, the most likely additions to the race from those who didn’t start on Friday night is Classie Brigade, who has been nominated and could seal a start by winning the Green Mile at Methven on Sunday, while Triple Eight could also be a Cup starter.

The All Stars other Group One winner was the magnificent Bettor Twist, whose never say die attitude saw her out scrap La Rosa after being off the bit at the 400m.

It was a superb staying effort, something we are getting used to from Bettor Twist, but this performance was even a level above her Sires’ Stakes win of three starts ago.

It capped a special week for driver Tim Williams who with wife Aimee Edmonds became parents for the second time on Wednesday with the birth of son No.2, Levi.

“It has been an amazing week with Levi arriving and then that win was something special,” says Williams.

“She tries so hard and never knows when to give up.” While La Rosa was brave in second and Darling Me and and Braeview Kelly later in the night also more than solid, it will take something special to out-tough Bettor Twist come the Sires’ Stakes Fillies Championship on December 31.