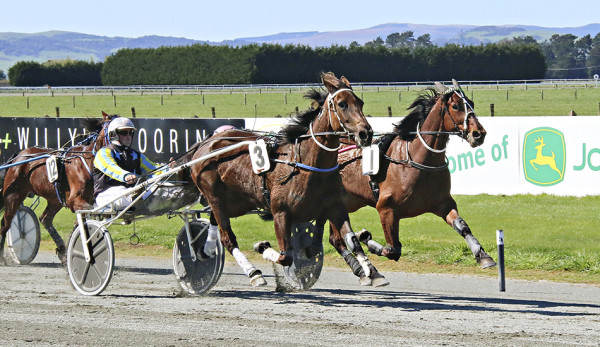 The curiously named trotter made it back to back victories for trainer Brian Norman and driver Jonny Cox with a narrow victory in race 4 after battling runner-up, Madrik, all of the way up the straight.

Steve – who, despite what her name may suggest, is a six-year-old mare – got up to score by a head in contrasting victory to her win in her first start for Norman, last weekend.

Then, the Repeat Love mare bolted in by a massive thirteen and a half lengths at Ascot Park.

The win came in the horse’s first start since Martin, his wife Joan and daughter, Jennie Wilson, purchased the trotter.

It also continued a remarkable winning association between Norman and Martin that has run for more than 30 years.

In that time the owner and trainer have never had a horse together that has not won a race.

And there have been plenty of them.

“Glendhu Princess was our best one – she won seven,” Martin said.

“Most of them won three or four races and then have been sold to Australia.”

“Brian keeps an eye out for me all the time, to see what is available.”

“This is one he came across and rung me up and asked if I wanted to buy her.”

“He is pretty astute when it comes to picking them, with this one he was dead right.”

Martin’s association with Norman came through the trainer’s brother-in-law, Alex Milne, around thirty years ago.

“Alex had one that wasn’t doing too good, so he rang me up and asked me if Brian could have a go with it.”

“And then on we have continued the association.”

Martin was in the syndicate that raced former smart trotter of the late 1980s, Ono’s Invasion, from Milne’s stable.

At the beginning of his harness racing journey, Martin would pre-train his horses before Milne put the finishing touches on them and took them to the races.

“We started off with gallopers and then got into trotters.”

“I had my own track out at Weston (near Oamaru) and I used to train horses there then take them down to Alex.”

Few of his wins over the past five decades have been by the incredible 13 and a half length margin Steve won by last weekend.

Martin admitted he never saw that kind of performance coming.

Though Steve only got her head in front of Madrik in the last few strides of Thursday’s race, Martin did not necessarily think that was a bad thing.

“It was good to see her tested and see how she would measure up in a better field.”

“And it didn’t appear to be any trouble to her.”