Stac has come a long way in a very short time 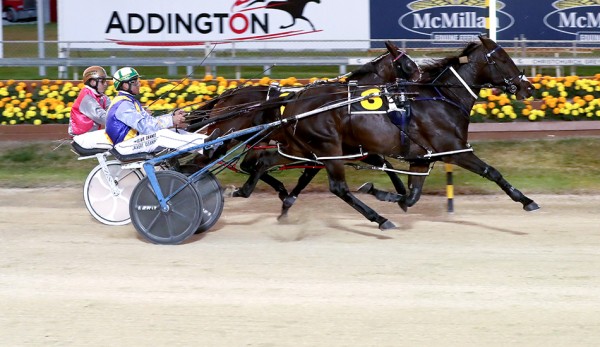 Not many horses are sent out a $1.20 favourite on debut in a maiden at Addington, but that was Stac just recently.

The four-year-old gelding by Well Said is now unbeaten in four public outings and clearly has a very bright future, all of which is all the more surprising when one considers that up until about a month ago, he’d looked nothing out of the ordinary.

In fact he’d been looking very ordinary if not hopeless.

“We broke him in and gave him a few preps, but you wouldn’t see a lazier horse – we just couldn’t get him to go at all,” said trainer Regan Todd.

“Then myself and Dave (breeder-owner Clemence) sort of went different ways and rather than having 5-6 in work for him, we were doing just 1-2.

“So Stac spent a year and a half in the paddock while we worked our way through a few others.”

Stac wasn’t much better when he was finally brought back into work late last year, and he wound up in Todd’s barn at Lavros Lodge at Yaldhurst, where he does the young ones and a bit of pre training, along with those that don’t really need to be at the beach such as That Alexander Guy.

“I like to keep the numbers at the beach to no more than 15 and when a space becomes available, we’ll go and grab something from Yaldhurst.

“Murray Howard runs that side of the operation for me and is full-time, with Davy Moore helping out in the mornings.

“We’ve been doing things that way for about a year now and it’s working really well.

“We weren’t getting far with Stac last year and in the end we just threw the hopples away as he can free-leg it.

“We were just using him to educate the young ones, but he got to a stage where we figured it was worth taking him to the workouts the next week.

“Well he’s just got better and better with each and every run – got sharper every time he’s gone off the place.

“It’s amazing to think how far he’s come in such a short time.”

Stac won his first workout at Ashburton on March 23, coming his last quarter in 26 in a heat for learners.

The following week he won another trial at Rangiora from a mobile, making him eligible for his debut.

With Robbie Close in Auckland with Play Filly, Blair Orange eased Stac out from the gate before sending him forward to take the lead off Adhara with 1800m to go.

Adhara has developed into a pretty good maiden for Darren Keast and drew level with Stac about 100m out, but Orange was just kidding and Stac was pulling away again at the finish.

Leconte was third over four lengths away after following the two favourites around, which would underline just how good was the performance of Stac, even if it was a little too close for comfort for the punters.

He has certainly made up for all that lost time in a hurry.

What he has also done is almost certainly given his dam, Star Rhapsody, the record for the most winners from a New Zealand broodmare.

He is the 16th and last foal from Star Rhapsody and is her 14th winner.

Her first foal in Star Rosette qualified and went unraced, while another in Roxy Star raced five times without winning.

The previous record is thought to be Sakuntala’s 13.

Clemence has bred the last nine foals from Star Rhapsody after acquiring her from his grandmother Jessie Alabone, a sister to Bill McDonald of Starship fame.

The first two foals McDonald bred from the unraced Good Chase mare Star Nurse were top colts in Ian Mac and Starship in the early 80s.

McDonald owned Starship with Alabone and trained him to be a brilliant two-year-old, second best to another freak youngster in Tuapeka Knight, before selling him to a syndicate.

That syndicate included John Reedy, who took over the training of Starship as a five-year-old and won the Ashburton Flying Stakes first-up with him.

Starship was unplaced in the New Zealand Cup that year, but almost won it a year later, finishing second to Neroship by half a length, while he was also beaten only a neck by Christopher Vance in an Auckland Cup.

Ian Mac was sold to Perth after winning two of his first three races and went on to win a WA Pacing Cup.

Later Star Nurse produced a Lordship sister to Starship in Venetian Star and her first foal was a top colt in Anvil’s Star, who was also second in a New Zealand Cup, to Il Vicolo.

Venetian Star later produced Star Rhapsody, a daughter of In The Pocket who won four races for McDonald and Alabone.

McDonald had given away the training by this time and Star Rhapsody was trained by Ian Cameron and later John Lischner.

When McDonald passed away around 15 years ago, Alabone inherited all the horses they had together, but she was in no position to keep them.

“She was about 96 at the time and said to me she was going to have to sell them all,” recalls Dave Clemence.

“She put two colts in the yearling sales (in 2007) and I figured I’d buy them both and race them with her to give her an interest.

“I had no interest in the horses at that stage and thought she would be dead within a year or two.

“Well she lived until she was 107 and when she did die a few years ago, she was the second oldest living person in New Zealand.

“She was still driving at the age of 100 and she died the same week that her last living son did.

“I can recall being in the hospital with her and she told me that she had said to a nurse, that if she looked like passing on, to not worry about trying to

“She said go and get that nurse because I’ve changed my mind.”

One of the colts that Clemence bought was by Christian Cullen from Venetian Star and he was “a stark raving lunatic”, but the other one was Rocket Star.

A Badlands Hanover colt from Star Rhapsody, Rocket Star was a lovely horse that could be left entire, and he won six of his first seven starts going into the 2009 New Zealand Derby.

Regan Todd was just starting out as a junior driver at that point, and drove Rocket Star in five of those wins before trainer David Butt took over for the Group races, finishing second in the Southern Supremacy before a big sale to Perth, where he won over $400,000.

“I put Regan on as the driver because he was doing all the work with him at home, which put Davy’s nose out of place,” said Clemence.

Rocket Star wasn’t Todd’s first winner, but at that point he was easily the best horse he’d driven.

“You could put him in the middle of the track and he’d still win,” Todd recalls.

Clemence had also gone and bought Star Rhapsody from a dispersal sale of McDonald’s estate and the first foal he bred from her was Strata Star, a nice mare by Bettor’s Delight who Todd trained to win five races and $40,000.

She later raced in Australia for Clemence and won another three races at Menangle under John McCarthy, one a mile in 1.53.3.

Strata Star returned home with a colt by A Rocknroll Dance in Vulcan Star, who won three of his 11 races for Todd before a sale back to Australia last year, where he has yet to be sighted.

Clemence has also bred Sandvik Star (5 NZ wins, $40,000) from Star Rhapsody and five other fillies, but Strata Star is the only one he has been breeding from and she hasn’t produced a foal in four seasons.

“I’ve had some health issues in recent years, with cancer and then a stroke last year, and I haven’t had much to do with the horses to be honest.

“I’ve got 80 acres next to Davy Butt at Woodend Beach and I’ve had to just leave the horses to Regan to sort out.”

Clemence purchased the property with a view to setting up Todd in a training establishment, but delays with consents and a downturn in his water drilling and pump business resulted in Todd forging ahead and setting himself up.

So it’s been a tough few years for Clemence, but in Stac he suddenly has something to cheer him up. – By Frank Marrion

FOOTNOTE: Stac is short for St Andrews College, where Clemence had sons in the primary school.