So far so good for Enghien

Ben Hope doesn't want to get too far ahead of himself, but maybe, just maybe, some big races could be on the horizon for Enghien.

In what was his first start in nearly three years the eight-year-old gelding came off a 30 metre backmark to finish second in Friday's Hydroflow Handicap Trot (2600m) at Addington.

"It was a big effort, to sit three wide as he did and then ran on at the end it was great," says Hope who drove the horse for just the fifth time. 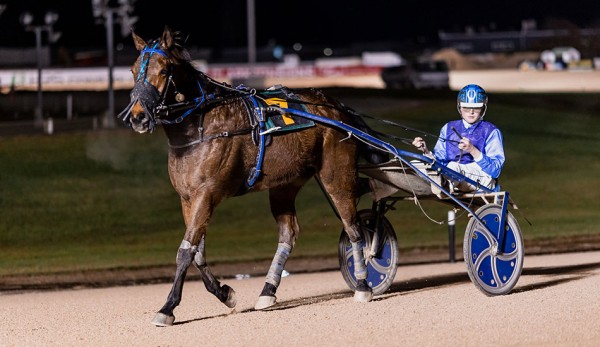 The son of Love You has won 15 of his career starts and was an age group star before suspensory problems sidelined him in recent years, with his last start being in October 2019.

On Friday night Enghien started safely and with Hope never forcing the issue they were last with a lap to go. After being caught wide they made their move to run My Moment's Now to just over a length.

"It's everything we wanted to see from him" says Hope, "he felt great and we were very pleased with him."

Trained by his parents Greg and Nina Hope, who were in Queensland watching stable star AG's White Socks race at Albion Park, Enghien will now be aimed at another race next month.

"We will take our time with him, and we have to be patient but the signs are very good so far."

So could Enghien be a contender for trotting's big features, including the Dominion during New Zealand Cup week?

"It's a possibility, I wouldn't say it's our goal at the moment but if things go well you just never know."

It's all promising news for a horse that was good enough to win the Harness Jewels, and the Northern and New Zealand Trotting Derbies in 2017.