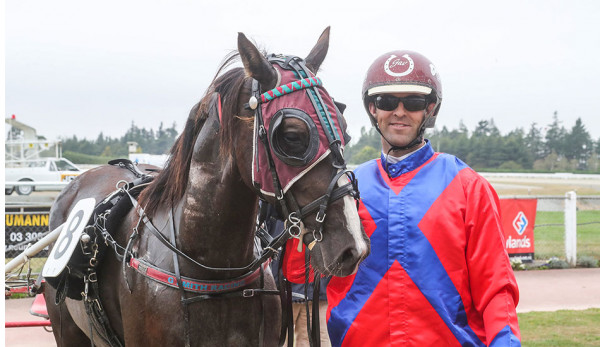 Gavin Smith pulled off a brilliant training and driving feat when My Ultimate Chevron sped home to win the Sapling Stakes at Ashburton on Saturday.

In just his first start, the two-year-old showed the tractability of a wily professional when charging home to win the Group Three feature.

After pulling off a remarkable victory Smith deflected all praise onto his two-year-old.

“He is a just a natural wee horse, he has always been well balanced and good gaited and zippy,” Smith said.

“We just needed to see if he could do it when we went a bit quicker, which he stepped up and did today.”

My Ultimate Chevron is raced by Australian owners Scott Whitton and Jodie Foster through their Tumby Park Pty Ltd.

The pacer provided Smith and his fiancé Alisa Corser with a rare moment when the couple both liked the look of him at last year’s National Yearling Sales in Christchurch.

“When I went to the sales he wasn’t actually on Scott’s [buying] list – he is a student of form and breeding,” Smith said.

“This horse was one that I really liked and sort of pushed him into a bit.”

“I normally go around and look at the yearlings with my partner Alisa, who is a vet.”

“We didn’t see him, but then she saw him walking across the parade ring and said to Sandi Curtin ‘gee I really like that horse’.”

“When Sandi saw I had bought him she said to Alisa ‘did you tell Gav about that one’.”

“She hadn’t and it is coincidentally about the only horse we have ever agreed on.”

Smith looks to be in for a big season with his two-year-olds after producing James Cagney to win a trial impressively at Rangiora on Wednesday.

In the past the trainer-driver has sold many of his early running stock, but this season he is set to enjoy racing them.

Though Tumby Park Pty Ltd was active at this year’s National Yearling Sales – buying two lots – Smith was not.

With nice stock in his breeding portfolio and the loss of a couple of major clients, he has decided to go in a different direction with his ownership options this year.

Smith is syndicating two Majestic Son yearlings – a filly from Turbo Pat and a gelding out of All Shook Up.

“I didn’t buy on spec this year for a change, just with losing those clients I am trying to introduce a few new people.”

“I thought perhaps by leasing a few nice horses out I might get a few new clients in and have a good time racing a couple of nice ones.”

“Normally they would be horses that I would get up and sell as early two-year-olds or three-year-old olds depending on how they develop.”

Smith will lease the yearlings to his potential owners meaning no up-front costs.

The pair are currently in their second preparation and they are pleasing their trainer.

“They both feel like nice horses, they both broke in really nice and they both have a fair bit of pedigree behind them, too.”

The three-year-old charged home down centre-track to catch the leader and runner-up, Leaf Stride.