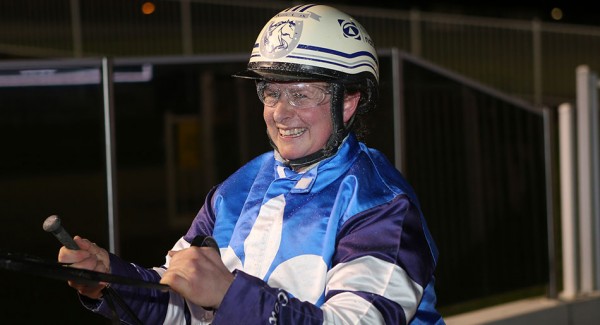 Spy Da Moment has been quite the revelation in recent weeks.

And not just for a hat-trick of 1980m mobile wins since returning from a spell either.

The eight-year-old gelding came back as a two-win trotter and it was only a mild surprise when he resumed and downed King Cassidy (10 wins) and Kowhai Sundown in a R51-60 trot.

But then he sat parked and ran down Sod’s Law in a free-for-all where he had Woodstone on his back on the home turn and he was still a length in arrears at the finish.

Admittedly, things had gone the way of Spy Da Moment that night with the likes of Splash Cola and The Dominator taking themselves out of play with early mistakes.

But on Friday, August 13, Spy Da Moment sat outside The Dominator with noted speedster Time In A Bottle in the trail and he beat them both home with a 27.7 last quarter.

Owner-trainer-driver Katie Cox was again able to dictate things from outside the leader and not many would have predicted Spy Da Moment being able to sit parked to open class trotters and beat them on their merits before that.

That is where Spy Da Moment has been a real revelation – just a few weeks ago he would have been a nine-year-old normally who was a winner of two races since qualifying two years and five months ago.

There is no question Cox has deserved the success - $23,000 from the three wins – given the array of issues and the amount of time she has put into Spy Da Moment.

She got him as an early five-year-old from breeder Paul Corkran and pretty much had to start from scratch with a horse that was even a problem just to lead.

“He’d been difficult to handle so he’d been boxed a lot and was uncomfortable around other horses,” said Cox.

“To his credit he had been fed really well by Paul.

“I spent a year working on him before he went to the workouts and it took a long time before he would actually work with another horse on the track at home.

“I would often just take him to the races with me for the experience because when I got him, he hadn’t even been on a trailer float.

“From the first workouts it took another six months before he qualified.

“There were people who thought I was mad taking him on and I probably wouldn’t have if I hadn’t come from a show jumping background where we were used to breaking in older horses.

“But I was grateful for being able to lease a horse from such a good trotting family.”

Getting to the races and actually doing things right and being competitive were different matters however.

“It would only take another driver growling at his or her horse or the sound of wheels banging and he would panic and lose it.

“So it wasn’t easy early on when you were lining up off the unruly mark in stands and in full fields.

“But I knew he had the ability and a beautiful gait and he had a lot of stamina, because no matter what we were doing, he never got tired.

“It was just his mind that needed to be worked on.”

Spy Da Moment was slowly rounding into shape around two years ago and won his maiden at Addington at his fifth attempt.

Despite being rough in his gait early, Spy Da Moment made his way through the field and settled in third before Cox popped off the fence to sit parked from the 1400m.

They put the pacemaker Dr Cliff to the sword down the back and simply outstayed them to score by two and a half lengths.

Then Spy Da Moment faced that big jump in class and ran into the likes of The Bloss, The Player, She’s Allthecraze and Sundons Flyer, or toughened veterans coming back down the ratings.

And even a horse like Oscar Bonavena on the way up them.

Spy Da Moment finished second to Some Time at Addington in his first mobile around this time, but then he ripped or pulled a muscle in his hind quarters and needed some time off.

“I think he’d done that on the other side as a young horse but there was no set formula for the recovery other than a suggestion to keep him moving.

“So he spent a lot of time on my rubberised horse walker.

“Then there were foot problems and that was an on going issue for quite some time.

“Along the way we were also stood down to trial for repeatedly getting things wrong.”

Spy Da Moment made it back to the races late last year and kept to mobiles, he showed some pretty solid form with seconds to In Sequence and Smokin Bandar before he won again at Addington in February.

That was his first start back in the draw from mobiles and Spy Da Moment again sat parked for much of the running and outstayed them.

But then he blew a stand at Addington and was pulled up and went off stride in a mobile mile at Ashburton, which put him back on a warning.

So Cox tipped him out and started again and it is since returning that Spy Da Moment has gone to another level.

“I’ve put the half hopples on him lately and they’ve been well worth the money.

“The mobiles and being in the draw has also been a big help.

“He’s still only had the 24 races, but his manners are better now with a bit of experience and he’s past a lot of those earlier issues.

“Basically everything has started coming together although the stipes still had a word to me the other night about being on the gate.

“Two starts back one galloped right beside him so I’ve just been wary of getting him underway safely.”

But despite his age, Spy Da Moment is still lightly-raced and there will be plenty of racing left in him.

He is the only foal from Pick The Moment, a Sundon half-sister to Take A Moment, who was still going strongly when he went amiss as a 10-year-old.

Now’s The Moment was another half-sister and she produced the amazing Moment Of Truth (29 wins), who was still winning at 14, along with Dr Hook and Oscar Bonavena among others.

Their dam Nakura was a lovely mare and the only one that was any good sired by the French stallion Jet d’Emeraude, which would explain the late maturing tendencies and longevity in the family.

Corkran has recently gifted Spy Da Moment to Cox due to “all the time and money she has invested in him”.

Around the same time as acquiring Spy Da Moment, Cox also purchased a sister to Take A Moment in Stay A Moment, whose first two foals were five-time winners Ace Moment and Majestic Moment (US1.55.8).

She was in foal to Majestic Son, but that foal proved a wobbler and had to be put down.

She has since produced a yearling colt by Majestic Son and a weanling filly by Volstead, which are also shaping as rather big horses.

Cox has also acquired an earlier foal from Stay A Moment in Love A Moment, by Love You.

“I broke her in when she was almost four and while she had a great gait, she didn’t enjoy the work and the attitude wasn’t there.”

She has produced a weanling filly by Majestic Son and is now in foal to Muscle Mass for Rob Courtney, who borrowed the mare to breed his first trotter.

Cox also has her good pacing mare Mad Lu Li in foal to Art Major, although she expects she’ll be returned to her owners after foaling.

Booraa was also shaping as a nice mare for her earlier this year when she won both days at the Marlborough meeting beating subsequent Southland Oaks winner Bettor Talk Art, only for her to be sold to Team Bond.

But it is the big trotter who is Cox’s focus for the moment, with Spy Da Moment now repaying the sizeable investment that she has made in him.