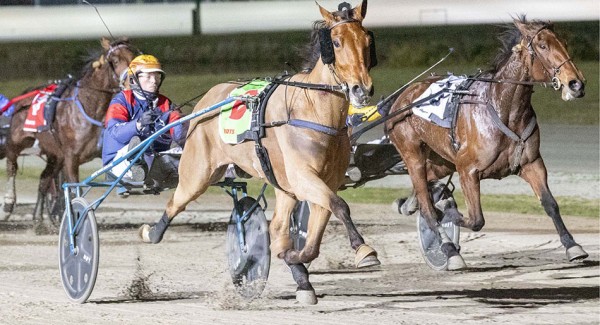 When trainer Anton Golino recently retired star trotting mare Dance Craze and he hoped he had a replacement in waiting.

Judging by Im Ready Jet’s three runs this campaign, he was right.

The four-year-old Quaker Jet mare ran two slashing places before a dominant, career-best win in the Group 3 Maori’s Idol Trotters’ free-for-all at Kilmore, beating stars like Majestuoso, Cover Of Darkness and others.

It was the way Im Ready Jet won, which underlined her huge potential.

She came across from a wide draw, sat parked outside stablemate Always Ready and zoomed clear at the top of the home straight to score by 2.8m in a 1min57.5sec mile rate for 1690m.

“I think I surprised a few people early this year when I said she was potentially as good as Dance Craze,” Golino said.

“We’ve always liked her and she’s still young, but it’s all starting to come together for her now … I think she could be a bit special.”

Her two richest wins so far have been in the Breeders Crown finals at two and three.

The next major target is likely to be the $50,000 Group 1 Australasian Trotting Championship at Melton in three weeks.

There was a strong trotting theme to the Kilmore card with two $50,000 Group 1 Australasian Premier Trotting Sale finals.

Emma Stewart and Clayton Tonkin’s exciting filly Banglez sat parked and was still too good for classy NSW raider Aldebaran Ursula in the fillies’ final in a 2min1.8sec mile rate for 2180m.

Former Kiwi horseman Brent Lilley won a farcically run the colts and geldings with Aldebaran Zeus, who led, dawdled through a 33.8sec first quarter and just held-off Whos The Man along the sprint lane to score by a head in a 2min5.6sec mile rate.

Ray Williams’ four-year-old had little more than a trackwork experience when he dipped into free-for-all racing for the first time at Gloucester Park last Friday night.

The son of American Ideal led easily from the pole for driver Aldo Cortopassi, who was allowed to dictate terms through 60.5sec middle half then rip home in 55.1 and 27sec flat to win running away by 6.8m.

Magnificent Storm only raced once in NZ for Todd McFarlane for a ninth at Alexandra Park on October 25, 2019 before being bought by Team Bond.

He’s won 15 of his 16 starts in WA with the only defeat coming when a fantastic second to Minstrel in the Group 1 Golden Nugget back on February 12.

At the time most felt that Nugget form would prove special and it has with Minstrel also winning all five runs he’s had this campaign.

Opinions are divided as to which young buck is the best.

Now we await them clashing, which will be in coming weeks at free-for-all level at Gloucester Park.

He’s a genius around the old-school, tight circuit and showed it again with an inch-perfect drive to win the $50,000 Group 2 The Binshaw (2130m) aboard Alta Intrigue last Friday night.

Leader Al Guerrero was crunched into $1.45 favouritism, but, as he’s done so many times before, Hall Jr found a way to cause a minor upset with a glorious drive on Alta Intrigue, who snatched a nose win on the line in a 1min57.8sec mile rate.

The other big win of the night came from underrated three-year-old Otis, who thrashed his rivals in a slick 1min58sec mile rate for the longer 2536m trip.

Otis has run well in the biggest three-year-old features against the likes of Lavra Joe and Mighty Ronaldo, but trainer David Thompson thinks he is only now starting to really blossom.

“It’s been a strong crop, but he’s a lovely horse, this one. It didn’t surprise me he came out and did that because his trial was amazing (at Byford) the other day,” he said.

What a pick-up Majestic Cruiser has been for Menangle trainer Jason Grimson.

The former Victorian pacer has relished the style of racing at Menangle with three wins from just four runs since moving states.

Majestic Cruiser scored his best and most important win yet when he stormed to an 4.4m victory in the Group 3 Paul Fitzpatrick Free-For-All (2300m) in a scorching 1min53.4sec mile rate.

It was the first leg of a winning double for young gun driver Cam Hart, who combined with former Kiwi gelding Spirit Of Anzac and trainer Jack Trainor to win race six.

Spirit Of Anzac led throughout in a 1min52.3sec mile to make it two wins from as many starts since coming across from NZ’s North Island where he won seven races.

Star trotter Tough Monarch is likely to hit the road again next month.

Rickie Alchin’s nine-year-old, who won the feature Group 1 trot during the recent Queensland Constellations Carnival, outclassed his rivals to win the free-for-all at Menangle last night.

Victoria has some trotting features just around the corner, starting with the $50,000 Group 1 Australasian Trotting Championship in three weeks.

The American Ideal four-year-old worked to the front from a wide draw and gave nothing else a chance in a slick 1min54.9sec mile rate for 2138m to win the opening race at Albion Park last night.

Tommy Lincoln has raced eight times in Queensland for Ray Green and now Mark Dux for five wins and a third.

The free-for-all at Albion Park produced an upset when Ian Gurney’s improving gelding Cardlesfromheaven stormed home to beat big guns Colt Thirty One and Crunch Time in a 1min52sec mile rate for 1660m.

What a season young Tasmanian driver Jack Laugher is having in Victoria.

Laugher came to Victoria about three years ago to get some experience then head back home.

But now he’s firmly entrenched in Victoria in second spot on the statewide and metropolitan driving premierships.

“It was a special night because Im Ready Jet could be the best horse, pacer or trotter, I’ve driven and Bettor Be The Bomb has been such a great horse to me, getting me into the Hunter Cup earlier this year,” Laugher said.