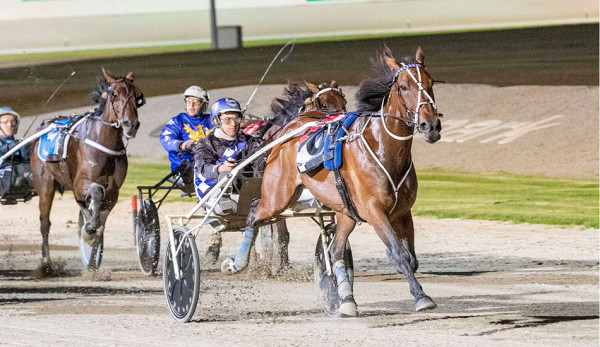 Star Kiwi trotter Majestic Man bounced back to his best to give young Brad Williamson his second career Group 1 win and the biggest of his career in the $100,000 Group 1 Australian Trotting Grand Prix (2240m) at Melton on Saturday night.

Majestic Man opened his Aussie raid with a Group 1 win, but draws have left him doing all the work in three defeats since.

Williamson pulled a masterstroke early when he ripped around the field took the lead from Magicool and never looked in danger after that.

Majestic Man dashed home in 57 and 28.5sec second to beat a gallant and eye-catching Pink Galahs with outsider Monaro Mia in third spot.

The win carried an extra layer of satisfaction for Williamson given his father Phil won the 2005 Grand Prix with former star mare Allegro Agitato.

“I remember watching that when I was a kid so it's a big thrill to come over here and win," he told Trots Vision. "I couldn't be happier. It's the biggest race I've won tonight so it was a big thrill."

Champ Tornado Valley copped a check soon after the start from his back row draw and eventually moved around to sit parked before tiring late for eighth.

Majestic Man now heads to Sydney for the last run of his hugely successfully Aussie campaign in the Group 1 NSW Trotters Mile at Menangle next Saturday night.

Given he’ll be off the front row and has such explosive gate speed, Majestic Man is sure to be favourite and gets his chance to not only win but post a blistering mile time.