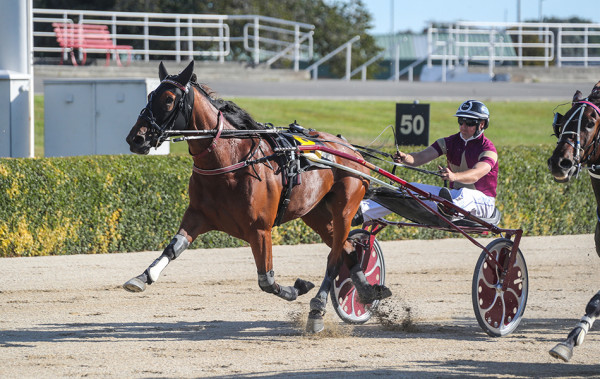 Salvo produced the middle leg of a treble of outstanding performances with her flying late finish to win at Addington on Friday night.

The nine-race card started in the with a simply outstanding effort from Shut Up N Dance, who bolted in in race 1 by a massive ten and a half lengths for trainer Regan Todd and driver Matthew Williamson.

Next up, Salvo produced a sizzling last 100m to clinch her maiden victory right on the line for trainer Jack Harrington and driver Tim Williams.

Williams made it a double with Love You three-year-old trotting fillies when Wanna Play Me served up a record-breaking first-over crush to take out the listed Sires Stakes 3YO Fillies Classique.

Wanna Play Me stopped the clock in sizzling 2.24.7 to equal the fillies and mares national and track record for 1980m alongside both Dark Horse and Missalyssa.

The three-year-old also smashed the mobile mark for three-year-old fillies she set in her win in the rescheduled Sires Stake 2YO Trotters Championship in October by 1.6sec.

It was in that feature event that the three-year-old last saw the mobile gate.

And according to Jack Harrington it could be a while before she sees it again.

“We found, especially in the rescheduled Harness Million final that the gate wound her up quite a fair bit.”

“We are trying to steer away from the mobiles to let her learn her ringcraft a little bit.”

“We are thinking her first mobile this time may very well be the Trotting Oaks, so long as everything goes to plan.”

With the New Zealand Trotting Oaks a potential target for Salvo, Harrington clearly must have a decent wrap on the filly.

The way she let down in the last 100m of Friday night’s race to catch Jakarta, who looked to have race 2 won, suggested she has a slice of class about her.

“At this stage, it is probably too early to take on some of the better three-year-olds – but later on in another five or six races – to let her really get screwed down she could, ” Harrington said.

“Hopefully she will get better and better and she can be thereabouts against those good one.”

Salvo’s win comes almost two years to the day after Harrington purchased the filly at the NZB Standardbred National Yearling Sales in 2019.

The trainer was initially drawn to the filly by her pedigree, being by Love You from the Pegasus Spur mare Sungait Sally.

“The Love You factor was a massive plus.”

“I remember her mother had a few issues but she had a really nice way of going.”

“I just remembered her from watching her go and that was what drew me to Salvo.”

“And when I saw her she had really big ears and you love trotter with big ears.”

Harrington will be back at the NZB Standardbred National Yearling Sales in Christchurch next week trying to find another Salvo.

The trainer, who welcomes new owners to join him in his purchases, is best known for his strong results with trotters.

However, his stable has undergone a slight change in direction with most of his winners coming in the pacing gait recently.

“But if you look at this season Salvo is my fourth trotting starter and my first trotting winner and all of those starts have been hers.”

“It has been a bit of a reversal of roles the last couple of years.”

Harrington can head to the sales after a perfect one-from-one strike rate for the weekend after Salvo’s win.