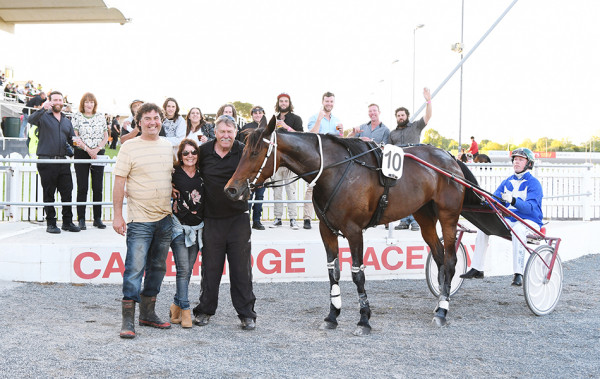 A refreshed Presidential Jewel made an impressive return to Cambridge Raceway on Friday night when taking out the Loveridge Enterprise Builders Handicap Trot (2700m).

The Roger Villiger-trained seven-year-old began well from the 20m mark and driver Joshua Dickie sent the mare forward off a sedate pace to take an early lead before handing up to Horace Horse.

Horace Horse began to tire with two furlongs to go and Dickie was able to extricate Presidential Jewel from the trail and chase down race favourite Delson to win by 1-3/4 lengths.

Villiger was in awe of the win and said he wasn’t expecting to witness such a dominant victory fresh-up from the mare.

“It was impressive that’s for sure,” he said. “Fresh up you never quite know but she has always raced well in that state before. You always go in hoping, but I didn’t quite expect that.”

Villger was also full of praise for Dickie’s performance in the cart.

“It was aided by a perfect drive,” Villiger said. “He popped around to the front when there wasn’t a huge amount of pace on and handed up.

“Things got a bit ugly there at the quarter but he got around that horse (Horace Horse). I thought if she ran second to the other guy (Delson) it would be a good run first-up, but she just proved to be too good on the night.”

While pleased with the win, Villiger had admiration for Delson’s effort from the 45m mark.

“To be fair, Delson did do a fair bit of work in the race and he was off 45m. He ran a great race, you can take nothing away from his effort.”

Villiger said he elected to send Presidential Jewel for a break two months ago after sub-par performances in a couple of junior driver races.

“Things just went a little bit awry,” he said. “She won really well at Auckland with a similar run (as Friday night) and then she went to a couple of boys races and we tried to get a free win and things just didn’t go to plan.

“We gave her a let-up and she appears to have come back really well.”

After Friday’s win Villiger was quick to deflect praise to his off-sider Barry Cullen.

“Barry Cullen helps me and he does all the work with her,” Villiger said. “She was a real handful to break-in and there were a few good judges that said they wouldn’t have persevered.

“She has just ended up a beautifully mannered mare and it was his perseverance and good horsemanship that has made her what she is.”

Josh Dickie makes big decision to move across the Tasman

One of New Zealand’s most talented young harness trainers is moving to Australia in a shock decision that will see Josh Dickie officially stop training in NZ from tomorrow.