Fifty eight years ago he scored twice for Mt Roskill to secure a 3-1 win in the 1964 Chatham Cup final at the Basin Reserve.

Now, he's just achieved another milestone. He had his 50th win as a trainer when Neymar, a horse appropriately named after a footballing superstar, won an amateur drivers' race at Cambridge Raceway last week (March 2).

"It was a real thrill," says Darby, "I was by the stables and people were congratulating me on the 50th, I'd forgotten all about it. 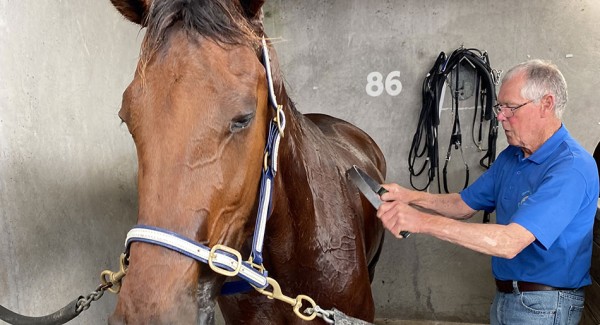 To make it even more memorable Neymar (as in Paris St Germain's Brazilian striker) was driven to victory by Ray's son Jeff. Another son Logan was fifth in the same race with stable-mate Comic Boy Hero. It was Neymar's first victory in three starts.

Neymar is one of four horses the Darbys have in work, alongside Lukaku - named after Belgian and Chelsea striker Romelu Lukaku - Comic Boy Hero and six-win trotter Bro Fawkes S. Both Neymar and Lukaku are by Sportswriter and were either bred or co-bred by the Darbys (with extended family).

Despite having Parkinson's Disease, every morning Ray, a retired school-teacher, is up at around 5.30am to give his horses breakfast before he jumps in the sulky to either jog or fast work them around his 11 acre (4 1/2 hectare) property that borders Pukekohe in south Auckland.

He's usually with the two older horses, and Jeff takes care of the other two "footballers". Logan also helps out, usually at the weekends.

"It helps with the Parkinsons," says Jeff about his father's daily routine, "getting going each morning and keeping active is a good thing."

Of all the horses he's trained Darby senior reckons nine race winner Comic Book Hero is right up there - "he's a lovely horse to work with" - but there was another stand-out.

"Hastilea was probably the best."

"He was prone to get excited .. and we never really found out just how good he was."

After starting out at John MacQuibban's stables at Massey, West Auckland, Darby started training on his own account in 1984 and bought his current property 30 years ago after a three year stint teaching in Brunei.

As well as the current race team the Darbys also have two full sisters to Neymar and Lukaku who foaled just before Christmas.

The next generation are on their way and Ray is looking forward to seeing how they progress.

As Jeff says of his father : "He absolutely loves it!"