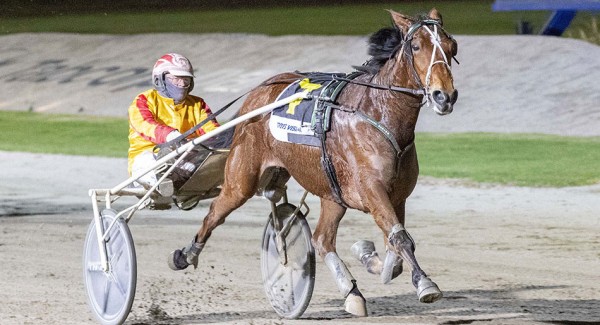 Former Kiwi trainer Brent Lilley has a budding star on his hands.

Queen Elida looked outstanding at three last season, but has effortlessly taken the step into open-age racing with brilliant wins at her past two starts.

Last night’s Melton win had to be seen to be believed.

Driver Chris Alford knew what he was doing sitting back near last and saving the daughter of Love You for one big run.

Queen Elida came from 20m off the pace at the 650m to roar to the front on the home bend and win running away by 13.7m. She was clocked to run her own last half in 55.9sec.

Everything says she will be a major player in our biggest trotting races later this year.

Earlier in the night, Lilley’s recent Kiwi pacing import American Legacy made it two wins from as many Aussie starts for the stable.

Alford worked forward to find the front on the American Ideal gelding and ripped down the back straight in a 27.7sec quarter before finishing-off in 28.6sec to win easily in a 1min55.1sec mile rate for 1720m.

Lilley made it a treble for the night when veteran Sicario won the fifth race, a claimer, at Melton.

The much-travelled I Cast No Shadow booked a Queensland trip with a runaway win in the free-for-all at Menangle last night.

The Kiwi-bred who had a long Victorian stint with Brent Lilley has thrived since joining Jason Grimson’s Menangle barn.

“He’s come back really well. It didn’t surprise me to see him come out and do that,” Grimson said.

I Cast No Shadow clocked a slick 1min53.3sec mile rate for the longer 2300m trip.

Earlier in the night, Grimson’s emerging star Fire Fox could only manage fifth, but lost no fans given how the race was run.

The former Kiwi scorched through a 25.7sec opening quarter in an unsuccessful quest to lead from the outside draw and had spent too much petrol when he eventually did find the front.

The other highlight of the Menangle card was the Group 3 Tatlow Stakes for juveniles.

There was a strong Kiwi flavour to the win of Chicago Gangster, who is by Tintin In America and was driven by Jack Trainor.

Could we see Like A Wildfire in Queensland too?

It’s hard to see why not after his stunning return from a let-up at Melton last night.

Despite sitting parked outside the fit and in-form Triple Eight and whooshed straight past him.

When Greg Sugars blasted a 26.3sec down the back on Triple Eight, Like A Wildfire thrived and then ripped home in 27.8sec.

It was Like A Wildfire’s first run since a fantastic second in the Tasmanian Easter Cup off a 20m handicap on April 16.

Now it’s just a matter of when Luke and Belinda McCarthy pull the trigger.

The former Kiwi five-year-old won his second trial in as many weeks at Albion Park last Friday.

“He could run next Saturday, otherwise it’ll be the week after,” Luke McCarthy said.

Spirit Of St Louis is early favourite for races like the Sunshine Sprint (July 16) and Blacks A Fake (July 23).

It’s certainly deserved after his stunning last campaign where took the step with a string of feature wins before chasing home and running mighty races behind King Of Swing in the Hunter Cup and Miracle Mile.

In a quest to snare another win and boost Tango Tara’s confidence, Andy and Kate Gath made a very rare trip to Mildura last Friday.

Tango Tara made the most of the huge class drop to dictate the race from outside the leader and win eased-down by 5.4m.

It was the six-year-old’s 12th career win and his first since November 19, last year.

Tango Tara was only second-up from a spell and the Gaths are contemplating a Queensland trip with him should their star trotter Majestuoso head north next month.

Three years since he last raced, former topliner Soho Tribeca made a huge step towards a comeback.

It was more than four years ago when Soho Tribeca looked on the verge of greatness after a monstrous third to My Field Marshal and Jilliby Kung Fu after sitting parked in the fastest Miracle Mile ever run.

Soho Tribeca has banked over $1.1 million with 21 wins from his 59 starts.

Stanley said he leaned on a friendship with Luke and Belinda McCarthy through their awesome Cobbitty Equine facilities to help with the comeback.

“Rob (Watson) and I spoke, and we just thought that if we are ever going to try it again, it’s now or never,” Stanley told thetrots.com.au

“Obviously with the Inter Dominion being held in Victoria this year, it gives you that little bit of a fairy tale if you get back anywhere near that level.

“So far this time in, even though he's an older horse, he’s really enjoying his work, he’s got a spring in his step, he’s sharp in his work and we’re really close to stepping his work up seriously.”

While WA’s buzz pacer Magnificent Storm works towards a racetrack return, his trainer Ray Williams is having some fun with another of his best pacers To Fast To Serious.

The locally-bred six-year-old was rewarded for recent consistency when he sat parked and won the $30,000 free-for-all at Gloucester Park last Friday night.

It continued the phenomenal form streak of driver Dylan-Egerton-Green.

To Fast To Serious ran down leader While They Pray and held-off favourite Double Up to win by 3.8m in wet and testing conditions.

Williams’ luck didn’t extend to the feature race, the Group 3 Pure Steel, where he’s emerging pacer Ezana ran well below his best as a $1.55 favourite.

Ezana led from the pole, but weakened to finish well back in eighth spot, almost 16m from winner Talk Up A Storm.

The race was run upside down with a slick 36.2sec lead time, 58.8sec middle half and only a 30.6sec final quarter in the wet conditions.