DD’s Super Stuart bowls them over at Addington

Jeremy Markham is hoping the week continues as it started after celebrating the victory of DD’s Super Stuart took in the Spectators Bar Trot (2000m) at Addington Raceway on Sunday.

Markham is currently in Wellington attempting to defend his Indoor Bowls National Fours title but was able to find time to watch the gelding he trains score his fourth victory, and first for the stable. 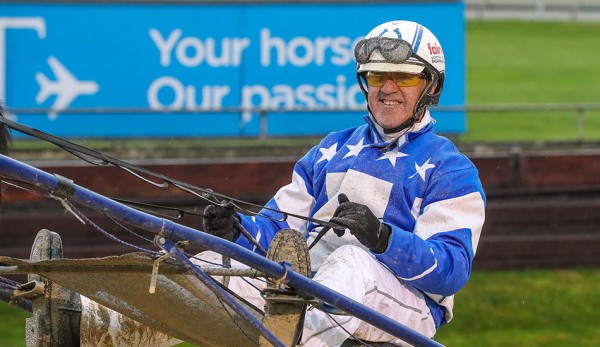 Previously trained by Markham’s father Carl, the latter was back in the bike on Sunday to steer in his son’s absence, and he made it count, guiding the son of Superfast Stuart to a 3-1/4 length victory.

“It was very good. He has been racing well over the last month or so without much luck,” Markham said.

“Sometimes he is his own worst enemy at the start and gets a bit far back. He had been building up nicely for today and the race conditions suited him.

“He seems to like races over 2000m or a little bit shorter. Today was the perfect race for him.”

Markham is hoping his winning luck continues in his bowling pursuits at the Indoor Nationals at Wellington this week.

“I am away playing indoor bowls at the nationals. I have got a national title to defend later in the week,” he said.

“I have been playing since I was 18, but the last five years have been pretty serious.

“Last year we were lucky enough to win a national title so I had to make sure I came to Wellington this year to defend it.”

While the tournament hasn’t got off to the best start for Markham, his key events don’t start until later in the week.

“I qualified for the singles today and then went out in the first round at post sections,” he said.

“I have got the pairs Monday), triples on Wednesday, and fours on Friday.”