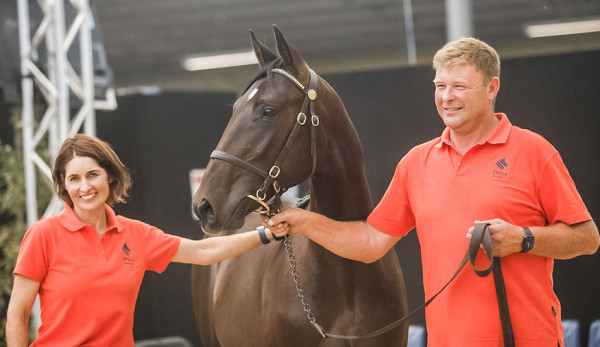 Southland vendors John and Katrina Price smashed NZB Standardbred’s record for its highest-priced yearling before breaking it again just minutes later as they dominated the final day of the National Yearling Sales in Christchurch on Wednesday.

The couple’s incredible run started when trainer Cran Dalgety simply refused to be outbid on a full brother to star Australian pacer Chicago Bull, eventually landing the standout colt for $310,000.

After just over 50 more lots went through the Christchurch sale ring the Prices cashed in again when leviathan owners Emilio and Mary Rosati won a bidding duel to secure their Bettor’s Delight colt from Hartofdixie for a $320,000 price tag.

After dozens of inspections in the weeks prior to the sale and interest in the colts getting to fever pitch in the three days leading up to it, the pair were being talked about as potential sale-toppers.

The Prices went into Wednesday’s sale’s confident that their colts would be sought after.

But John Price admitted he had not dared to dream the pair would sell for a combined price tag of more than $600,000.

“Definitely not, we had high hopes for the colts, they are lovely colts and we had a lot of interest in them.”

The Prices’ Bettor’s Delight colt from Hartofdixie does not follow the path her vendors typically take to the National Yearling Sales.

Unlike most of their stock, the new NZB Standardbred record holder was not bred by the couple.

The Prices jumped at the chance to buy the colt as a weanling and that judgment call paid off several times over on Wednesday.

“In the middle of winter last year we bought Hartofdixie the mare and a couple of weeks later we had the chance to buy this colt.”

“We thought why not, we had bought the mare and we thought we could buy him with the intention of putting through the sales.”

“So, we are happy with the result.”

“Chicago Bull was just a wee fellow, but Perfect Stride and this yearling are magnificent types of horses.”

Unlike many of their successes in the ring the couple will retain a share in the colt named Chicago Bear in Cran Dalgety’s ownership group.

After digging deep to secure the colt, Dalgety was elated.

In the Canterbury trainer’s opinion Chicago Bear was the top pick among the hundreds of yearlings he had inspected this year.

“In my opinion he was by far advanced on all of the ones I had seen this year.”

“His attitude was magic, he had an enormously good upbringing – on the nutritional side – and his [pedigree] page sold him too.”
“He was 11/10.”

Champion sire Bettor’s Delight made it a trifecta at the top-end of Wednesday’s selling when producing the third top lot, a $250,000 colt from Start Dreaming.

The yearling was knocked down to the All Stars Stable from Studholme Bloodstocks’s draft.

The sire’s stock sold at a stunning average of $115,000 across two days of the pacing section of the Christchurch sale.

Jack Harrington’s on a roll

Jack Harrington’s emerging as a trainer to follow after what he’s described as “one of his best weekends”.

Copy That needs tough workout ahead of Taylor Mile

Trainer Ray Green says he may have to manufacture a searching workout for Copy That ahead of next week’s Taylor Mile at Alexandra Park.