Was there a happier person at Methven on Sunday than local trainer-driver Neil Burton?

Well known for his work on the mower around the Mt Harding circuit Burton took out the first, after a barnstorming finish with his own horse President Pat.

The grin said it all.

"He's been a lot of time cos he's a real nervy type of horse."

Having originally qualified as a trotter the eight-year-old son of Le Pres won as a pacer in January last year. 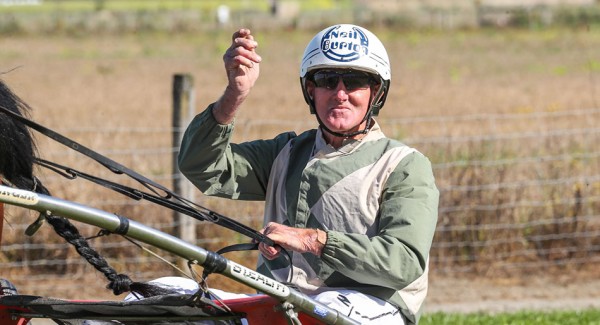 Burton then switched his gaits and it's worked a treat.

"He's happier trotting," says Burton, "we won a workout here by two and a half lengths so I knew we were close."

On Sunday President Pat was a mile off them early in the Shearmac Aluminium Joinery Trot over 2400 metres.

Over the final 600 metres he just kept finding though it looked like he'd been fighting for the minors only until leader Roydon Muscle veered wide, losing valuable ground.

As one racegoer commented as the winning combo returned : 'Good on ya Neil, you'd know every blade of grass out there wouldn't ya?"

Burton's had President Pat for five years now - and clearly delighted to make it win number two from start number 20.

While there would have been some celebrations Burton was due to be back on the mower Monday morning.