There's a symmetry about this Thursday's two-year-old feature, the Group Two Kindergarten Stakes at Wyndham.

He led out then trailed before clearing out to win his fourth race on end.

Such was Lordship's dominance as a juvenile that he won six of nine starts as a two-year-old, winning the Kindergarten, Sapling and Welcome Stakes, in 1961.

The feat was not matched until Ohoka Arizona completed the same treble in 2007, 46 years later.

Bred by Doris Nyhan, trained by husband Don, and driven mostly by son Denis Lordship was a compact black colt, standing at around 14.5 hands.

He was much adored during his racing and stud career, emulating his own father Johnny Globe. Among Lordship's star progeny were were subsequent New Zealand Cup winners Lord Module (1979) and Inky Lord (1989). Lord Module, an all-time great, won 28 from 93, while Inky Lord won 21 from 50. 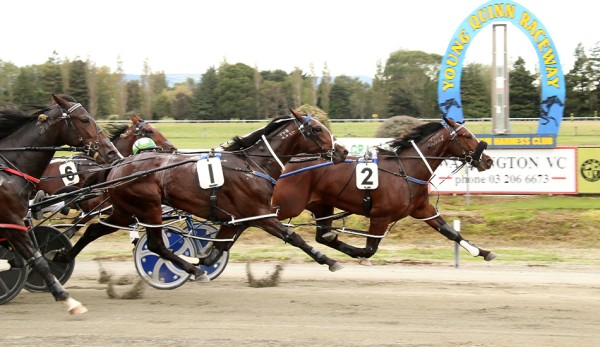 In 2003 the Kindergarten Stakes went from 2400 metres to the mile (1609m), and it produced something that's never happened since, a dead-heat. Nothing could separate Lennon and Bought In The Pub.

Thursday's running of the Group Two Kindergarten Stakes (3.43pm) will feature 9 horses, with all but one of them on debut.