Polish orphan made a life with horses in New Zealand

By Garrick Knight courtesy of the HarnessXpress

Poland-born Goryl, who was 89, came to New Zealand as an orphan during the latter part of the Second World War when he was still a young boy.

Over the course of his life, he developed a very successful panel-beating business in Newton, Central Auckland, before eventually relocating it to his Ardmore property in 1997 which would allow him to continue his love of training horses.

Until that point the horses had been done sporadically as a hobby.

Goryl trained 67 winners in a career that spanned from 1971 until 2015, a large majority of that spent with no or very few horses in work due to his work commitments. 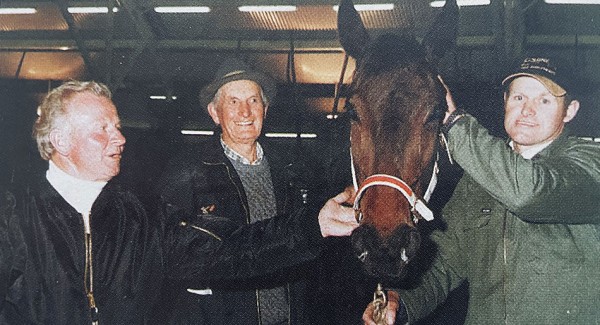 His halcyon period was the 1990s, when he trained 40 winners, especially the latter half of that decade when he had three good trotters – Meander In Eden, Liberator and Kingfish Kiwi – that all competed in the 1999 Inter Dominion Series at Alexandra Park. Meander In Eden was the best-performed, winning 11 races and over $90,000, her crowning achievement coming when setting a New Zealand record for a trotting mare over two miles at Alexandra Park in May of 1999.

The time of 4.05.4 shaved 2.6 seconds off the mark previously set by champion mare, Pride Of Petite, and was only bettered when another champion mare, the Australian La Coocaracha, won the 2002 Rowe Cup in a time .1 seconds quicker.

Cliff Wilson, who now works at Stonewall Stud, worked alongside Goryl at his Ardmore stable for most of the 1990s and 2000s and says he was a renowned farrier.

“He liked to do all his own shoeing and it was only just towards the end there it got a bit hard for him,” said Wilson.

“He was very good at shaving shoes and welding bits and pieces here and there. If horses used to hit their knees or had other gait problems, he would change their action to try and get them off their knees.

“People thought he was mad with some of his shoeing techniques but they very effective.”

It was no better evidenced than with Liberator, who was nearly put down as a foal due to deformed legs but went on to win nine races including a number at Auckland.

“Liberator could sprint up with the pacers but wasn’t an overly talented stayer.”

“The vet,John Ewen said he would never get him to the races; he had two cow hocks and one front leg that wouldn’t straighten.

“But Alek put egg bar shoes on him and wedged one up to take the pressure off his leg and it worked.”

In an interview after Meander In Eden and Liberator quinella’d a race at Auckland in 1998, Goryl said it was thanks to his wife that Liberator got his chance in life.

“When he was born his front legs were turned under and he had to be put in a yard with his mother so he could get fed.

“I gave a lot of thought to putting him down but my wife Gillian talked me out of it.”

Tony Herlihy had a long association with Goryl and said he had been meaning to call in and catch up with him not long before he died.

“He was always a big help and great to drive for,” Herlihy told the Xpress.

“I drove Meander In Eden a lot for him – she was a good tough mare and we had some good times with her. Alek loved to celebrate and enjoyed a good whiskey.

“I actually drove for him as a junior driver; the horse was the third ballot at Claudelands and I was a certainty beaten. I still remember it.”

Herlihy’s current property is just around the road from where Goryl used to train in the 90s, when Herlihy worked at the same property with brother-in-law Mark Purdon, and they often sought Goryl’s help with shoeing issues.

“He had some extraordinary looking shoes – they came in all sorts of shapes and weights.

“They didn’t always look great but the theory was always there and he was always good for advice and help with problem trotters.”

Goryl purchased the dams of both Liberator and Meander In Eden at National Bloodstock clearance sales.

Meandros, the Game Pride dam of Meander In Eden, cost $2400 as a 14-year-old with a Chiola Hanover filly at foot and Meander In Eden (Pernod Eden) in utero.

Kingfish Kiwi was regarded as the best horse Goryl had on potential, Wilson reckons, but he met a premature demise after a trial at Auckland in mid-1999.

“He was the better horse of the three good trotters Alek had, but he just didn’t have the manners of the other two.

“We gave him a brief spell after he’d raced through the Inter Dominions and some other good races.

“After the trial, just as Richard Brosnan was turning him around to come off the track, he dropped dead.

“Making it worse was Richard saying how nice and relaxed he felt during the trial.”

While a large majority of Goryl’s training wins came with square-gaiters, he did have some success with the pacers too, his best being Deluxe Byrd (seven wins between 1992 and 1993) and Sole Patron (six wins, 1993-1995).

As the new Millenium wore on, Goryl scaled back as he advanced in age but did breed six foals out of Meander In Eden, three of which he trained to win races.

One of them, the Earl mare Meander With Earl, has proved to be quite a good broodmare, leaving the current fast-class performer Kay Cee, six-race winner Little Miss Zigzag and Jo Stevens and Dylan Ferguson’s promising trotting mare, Rosie.

Goryl’s last good horse was Silver Stream, who he trained to win four races between 2010 and 2012 before leasing him to nearby trainer Jay Abernethy, where he would, incredibly, win a further 17 races.

“He was always good to me. He used to put me on as a junior driver and then he leased me Meander In The Sun to train, which won a couple of races and a grass track series for us.”

Abernethy spoke to Goryl’s widow, Gillian, at his funeral last week and she confirmed Meander In Eden is still alive and well, aged 31, and in a paddock at the Goryl farm alongside Silver Stream.

Herlihy felt so attached to Goryl and the mare (Meander In Eden) that he actually borrowed her eight years ago to breed a foal, some seven years after her last foal.

“I didn’t realise at the time that she was 20 years old!”

Named Monarch Eden, she qualified in 2018 but never raced owing to what Herlihy called “dicky legs”.

But, determined to keep the breed going, he’s bred a couple of foals by What The Hill out of Monarch Eden, the oldest being a two-year-old.

When Goryl passed away in his sleep on March 19, it wasn’t unexpected, but it still impacted many in the Ardmore/Clevedon and Paapkura region who had come to know and love him for his cheery demeanour and passion for harness racing over many, many years.

The late scribe Leo George said it best when writing about Goryl in early 1997 after Liberator won twice in four days at Alexandra Park, including at what was then a hugely significant New Year’s Eve meeting.

The first of the double was a race sponsored by Goryl’s panel-beating business.

“One of the good guys of harness racing couldn’t have picked a more appropriate race to be back in the winner’s circle.

“Apart from being a longtime race sponsor, Goryl has assisted the Auckland Trotting Club immensely by providing courtesy cars for visiting trainers at feature carnivals.

“It was nice to see the little guy getting something in return at the Cup Carnival.”

Aleksander Goryl is survived by Gillian and three children – David, Kristina and Ana – and their families.