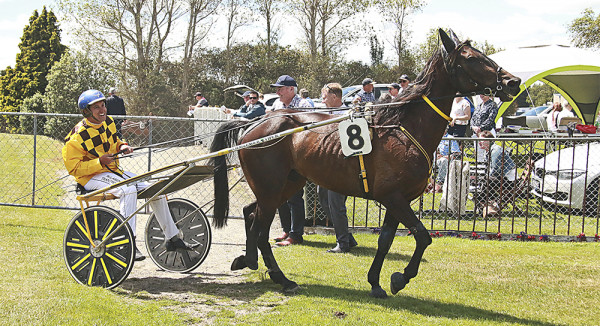 Oamaru trotter staked an early claim for performance of the Otago-Southland Christmas racing circuit with an incredible 15-length win at Gore on Sunday that almost had to be seen to be believed.

The Colin McKay trained trotter notched his first victory since April of 2018 when he and driver Brad Williamson left their rivals breathless before they even got near the home bend.

The last their opposition saw of them was as far from home as the 800m mark when Williamson let his 10-year-old charge start sliding away of the field.

Clear in the lead around the turn and completely lonely in the home straight, Playboy’s Brother crossed the line 15 and a quarter lengths in front of runner-up Miss Bamboocha to complete a remarkable victory.

Colin McKay admitted he has not been involved in a win quite like it in his 36 years as a trainer.

“That was an outstanding win and I didn’t expect it either,” McKay said.

“I expected him to win but not like that.”

Playboy’s Brother caught the eye of punters and was sent out favourite for his 2700m assignment after he was unlucky in his last start at Forbury Park when going to the line full of running when denied clear air.

Williamson took over the reins on Sunday after he convinced McKay to step aside.

“I got pushed out of the seat,” McKay quipped.

“Brad sniffs a win so he grabs it.”

“I am pleased to give him his driving fee and his percentage.”

Playboy’s Brother had slowly built his form back up recently after he made a slow return after the COVID19 lockdown.

McKay felt his horse was improving with every run leading into Sunday’s meeting.

“He has been well enough for quite some time.”

“He was racing well before the lockdown, he was running seconds and thirds.”

“But then the racing let up and I let up as well and he took a while to come back to it.”

“I thought he was near enough, but he wasn’t quite fit enough.”

McKay knew he was getting close to seeing the best from his trotter when he ran second at Methven to race rival Sunnivue Phileah before his unlucky run at Forbury Park.

“He went a terrific race at Methven and just got nabbed.

“But ever since then he has got fitter and fitter.”

“I have had him up on the grass at Cromwell and he just loves it.”

“I wouldn’t be surprised if he picked another one up somewhere on the Christmas circuit.”

His epic win at Gore is not the only proof that Playboy’s Brother thrives when based at Cromwell.

In January of 2018, the veteran trotter scored wins at Omakau, Roxburgh and Cromwell in the space of just five days when based at the Central Otago track.

It would be no surprise if the 10-year-old was back in good form at those three tracks after New Year’s Day.