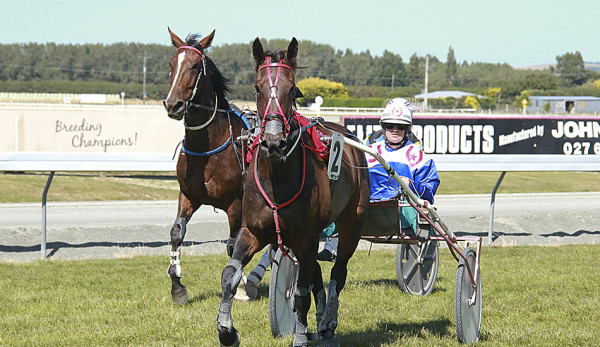 Lauren Pearson showed she had lost none of her skill in the sulky when winning her first race in more than fifteen years with Fanny Hill at Winton on Sunday.

Having a partner who is one of Southland’s best drivers in Brent Barclay has meant Pearson has not had any more than seven drives in each season since she won with Lady Of The House at Wyndham in February of 2006.

Clearly Pearson’s focus has been on training in that time going by the excellent strike rate her stable has produced.

Barclay suggested his former New Zealand Junior Driver Championship winning partner return to the track over summer and she showed she had not lost her winning touch with Fanny Hill despite only having had a handful of drives over the last decade and a half.

“I didn’t realise it was 15 years, I have had a few seconds and placings, but I haven’t had many drives in the last 15 years,” Pearson said.

“When you have got Brent – he is out there all the time.”

“We have just had a couple of trotters in lately and Brent has had other drives.”

“I have been driving them at the workouts and driving them in work, so he said you might as well get on and have a blat around for a bit.”

“I am really only filling in, but I quite enjoy it while I am out there.”

The five-year-old dashed along the inner to score in her first start from her driver’s stable at upset odds.

Though Fanny Hill had competed well in her recent workouts, winning in the slick time of 3.02.8 for 2400m was not something Pearson expected.

“She had been going good at the workouts but we thought she might have needed another run.

“But obviously her class took her through.”

Owner John Duff sent Fanny Hill to Pearson in the hope the mare could bounce back to her best form.

After taking over her training from Phil Williamson, Pearson’s initial hope was to have her racing “half as good as Phil had her going”.

That plan did not look like it would come to fruition in the early stages of Fanny Hill’s shift south.

“She is a horse that if you get her out of her routine she is a bit funny,” Pearson said.

“She showed nothing at home for a while.”

“It wasn’t until we took her to a workout that she improved.”

“And she has just got better and better.”

Sunday’s win was the fifth of Fanny Hill’s career and Pearson’s 42nd career victory in the sulky.

Pearson has no plans to drive more often after producing her pinpoint winning drive on Sunday.

Barclay is quite safe in his position as her stable’s number one driver.

“He is always number one,” Pearson said.