Peak on the move - but to where? 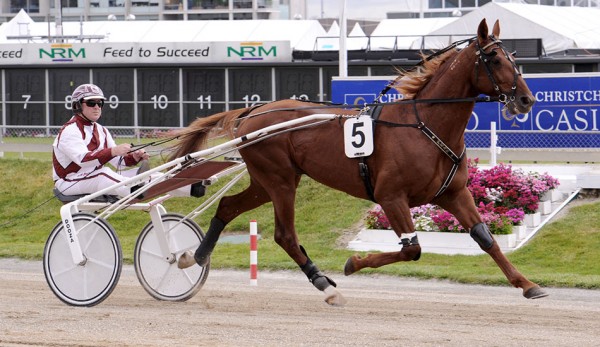 After serving more than 400 mares, Peak is on the lookout for a new owner, and a new home.

The 14-year-old chestnut has been at stud at Alabar Farm in Pukekohe for the past six seasons.

Cheval Rapide Syndicate manager Greg Ayers says: “We would like to gift Peak to somebody that will provide a new home and look after him and they will still be able to breed from him.”

Peak was a trotting trail-blazer when champion trainer Tim Butt brought him out from Scandinavia.

The son of French super sire Ganymede Peak (and a Danish mother) then had a record of eight wins from 45 starts.

“He was a calculated risk,” says Butt, who fell in love with European-bred trotters while campaigning the great Lyell Creek in Sweden, “he was a beautiful horse who had residual value as a stallion.”

He had just three starts in New Zealand for two wins.

He took out the Group Three Ashburton Flying Mile in October 2013, and then the Group One New Zealand Trotting Free For All on NZ Cup day. In doing so Peak became the first stallion to win a Group One in the Northern Hemisphere and then in New Zealand.

Three days after his triumph on New Zealand Cup day he fronted up in the Dominion. He finished tenth.

After initially going to Michael House, Peak ended up at Alabar Farm, alongside such breeding heavyweights as Art Major and Majestic Son.

“He is a great and a stunning looking horse,” says Alabar’s General Manager Graeme Henley.

He served 270 mares in this country and another 150 across the Tasman.

Among his best known progeny here are Doff Your Cap and Invictus while the Australian-based Gimondi has won nine from 26, including six last season.

But he is now in the same market as sires like Muscle Hill and Love You (and Majestic Son) and is not considered a viable commercial proposition.

“If he'd raced a bit more and had gone out on a high he might have got some better quality mares,” says Henley, “but the reality is that there is a myriad of frozen semen out there and we decided not to renew the lease.”

Butt says there’s a real difference between Peak the racehorse and Peak the stallion.

“I’ve had a lot do with his progress at stud, he’s been a bit disappointing and his stock can be highly strung. He was such a great mannered horse himself.”

Butt has had some success from Peak progeny, among them The Golden Lion (Peak - Young Monkey) who has won three from 13 in Australia.

Ayers: “Our preference would be to leave him as a stallion but if we have no uptake he may require gelding if this helps him to be rehomed”

The Cheval Rapide Syndicate is also offering to pay for the gelding procedure and relocation costs from Alabar if a suitable new home is found.