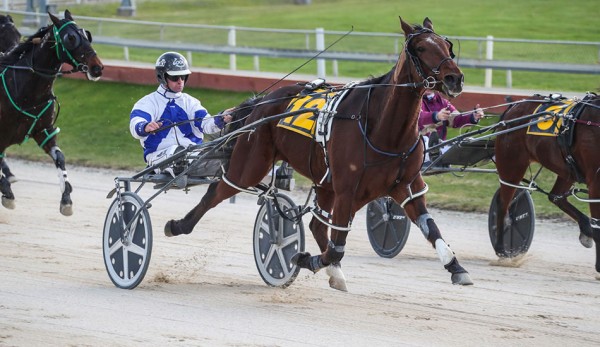 It’s not just his 16 wins that makes Pay Me Visa an exceptional horse.

The Andrew Stuart trained veteran continued his remarkable career and notched his sweet sixteenth victory when bursting home from three deep on the pegs at Addington on Sunday.

Far from a typical racehorse, Pay Me Visa is also a family pet and arguably New Zealand’s most profitable galloping pacemaker.

And because of that, he wasn’t exactly the spearhead of Stuart’s team on Sunday.

“I only took him and Martin John in as a mate for the maiden I had in (Get Outta Town),” the trainer said.

“I thought he would be hard to beat but he ended up being held up.”

“I thought it might have been impossible for Pay Me Visa from the draw (12) but he got a good run.”

Pay Me Visa shows no signs of slowing down as his ten-year-old birth date approaches, having brought up his third win for the season on Sunday.

Though his retirement has already been planned out, Pay Me Visa still has plenty of racing in front of him.

“He is fully sound, there is nothing wrong with him at all,” Stuart said.

“He gets his joints looked at now and then but then he’s good to go.”

“He has got a home here for life, he is the family pet and everyone loves him.”

“But he won’t be retiring for a while yet.”

“He is our galloping pacemaker, we use him to teach the babies, he’s a great GP.”

“There wouldn’t be a better one than him in the country, I wouldn’t think.”

Pay Me Visa came to Stuart’s stable as a yearling and has raced and won in every season since beginning his career as a three-year-old.

The pacer was originally raced by Ross Dougherty and Dave Kennedy but is now leased by his trainer.

Their victory was the reinsman’s 64th win this term, extending his new personal best following the 51 wins he notched last season.