Pash not slowing down yet 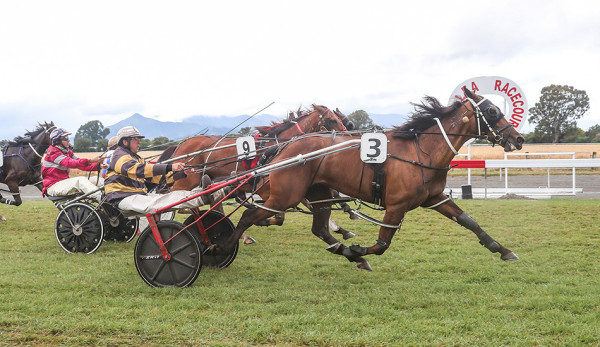 Richmond trainer Murray Pash may be 75 years old, but he is showing no signs of slowing down any time soon.

Pash is currently training four horses and was thrilled to pick up his first win of the season with Jazelle in the Eckford Engineering Mobile Pace (1850m) at Waterlea Raceway on Sunday.

“It was good to get it because all of the others out of Jass (her dam) have won races this season, so I was dragging the chain,” Pash said. “She has been a good producer that mare.”

Jazelle had been having a tough time of it this preparation, but regained form on the Blenheim track on Friday when finishing runner-up.

Pash took a lot of confidence from that run and was duly delighted when his mare stormed home late to win by three-quarters of a length on Sunday.

“I am very pleased,” Pash said. “We have had a bit of bad luck with her, but it turned out well today.”

Adding to the occasion was Pash’s wife Cheryl’s involvement in the horse.

“Cheryl, my wife, races the horse in her father Noel Berkett’s colours, he was in trotting for many years,” Pash said.

Based in Richmond, Pash faces a lot of time on the road to race his small team and he said it has been nice racing closer to home over the holiday period, in what he says is the lifeblood of the industry.

“Westport, Reefton, Nelson, and Blenheim have been going for years at this time of the year and it is good for the public,” he said.

“There are that many people on holiday in Nelson and you just have to look at the turnover figures which proves the point that country clubs need to be kept going.”

Pash has been training since the moon landing (1969) after catching the racing bug as a kid from his mother’s childhood friend, Hec Henderson.

“My mother came from a place called Orari which was a big horse area and a guy by the name of Hec Henderson went to school with her,” he said.

“He shifted to Christchurch and got to know Mum and Dad again, and when he first started out, when I was eight, I had my first drive behind a horse and I got the bug.”

Pash has been based in Richmond since the early 1970’s and he said has been associated with some class horses in that period.

“A horse I sold to Australia called Macraider went on and broke a record for a three-year-old in the States on a five-furlong track,” he said. “And I qualified (1997 Gr.1 Rowe Cup winner) Eastburn Grant, who was a top trotter.”

While 75 years old, Pash said he still intends on training for a few years to come, and he is looking forward to heading down to Christchurch in the coming week to campaign a couple of his team.

“I am 75 and everyone keeps asking how long I am going to keep going? I want to keep going for another five years, at least. I am not too old yet,” Pash quipped.

“We are looking at possibly going to Banks Peninsula next week with Jazelle. it just depends on her and how she works on Tuesday.

“We are hoping Change Is Good will be in on Friday night (at Addington) in the mares races. She went two good races, one at Nelson and one at Blenheim, that is why we thought we would go down for the mares races next weekend.”