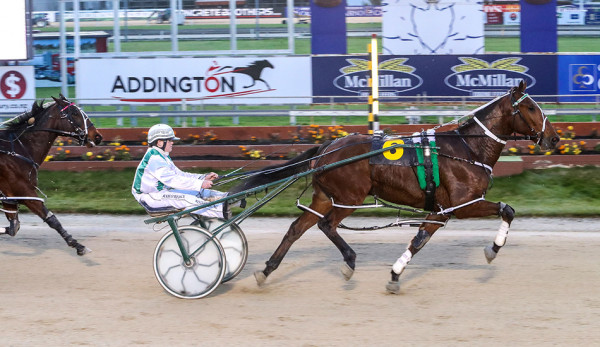 Striking Gladiator continued a winning run for trainer Gerard O’Reilly at Forbury Park on Wednesday night that looks set to add to the tally on Friday afternoon.

The Rakaia horseman had Striking Gladiator ready to score a returning win with his daughter Sarah in the sulky and the pair delivered in style by taking out race 7.

Set aside after clashing with star 3yr-old It’s All About Faith in July, Striking Gladiator thrived during recent time in the spelling paddock.

“He has got better this time in and he is a bit stronger.” Gerard O’Reilly said.

“He has got a big frame and even though he looks like a big, strong horse he has had growing issues.”

“The spell did him well and he has come back good.”

Punters did not miss the improvement in Striking Gladiator that was seen in his workout and trial wins leading into his resumption.

The pacer, who is owned by his driver and The Clann Syndicate, was backed into a $1.80 win price.

Striking Gladiator is now likely to be aimed at the two-day Nelson meeting on the second weekend in January.

“Sarah is pretty keen to take him to Nelson, he will end up on the circuit up there all going well,” O’Reilly said.

O’Reilly himself was in the sulky this time, behind Sweet Belle when she scored comfortably to remain unbeaten in two starts at Methven on Sunday.

“She is a lovely filly,” O’Reilly said.

“She had a spell after her first start as a two-year-old.”

“She is not paid up for any fillies’ series, so we had the luxury of giving her a good break.”

“She has come back good, she has been a lovely horse right from day one.”

O’Reilly’s winning run could continue he when substitutes for the suspended Samantha Ottley behind open-class star Majestic Lavros at Addington on Friday afternoon.

The reinsman admitted he was surprised to get the call up to drive the Mark Jones trained trotter, who has a key barrier draw advantage over his main rivals Heavyweight Hero and Dark Horse in race 9.

Majestic Lavros just needs to improve his manners when he starts from barrier 4 after galloping when looming up to the leader The Dominator in last weekend’s Trotters’ Green Mile at Methven.

Ifyousayso will attempt to continue the success the O’Reilly stable has enjoyed over the past week when lining up in race 4 at Addington.

The 4yr-old resumed with a solid second behind runaway winner Storm at Addington last week.

“He has bounced through the run really good, that has been his problem in the past,” O’Reilly said.

“The runs have knocked him a bit and we have to space his races.”

“But he is good and we are lining up with the good money up and we will see how we go.”

O’Reilly’s brother, Leo, also cashed in on a rare trip to Forbury Park.

On a night when Alexy made headlines for equalling New Zealand’s record for most starts, fellow 11yr-old Jerry Garcia took winning honours with his victory in race 4.

The victory was Leo O’Reilly’s first as a driver at Forbury Park since he scored with Top Brass in 2013.

The Rakaia horseman’s last win as a trainer at the Dunedin track came with Him Himself in 2000.