NZ Bred to star in hyped US match race 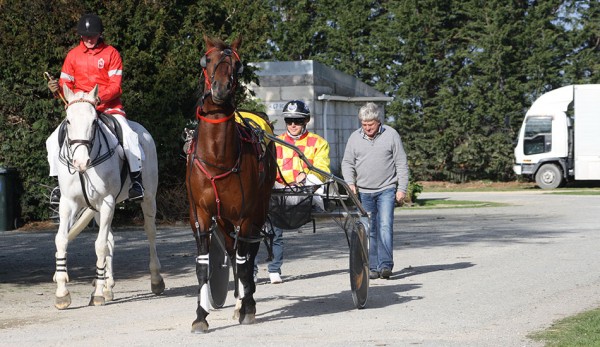 New Zealand bred pacer Provocative Prince is set to star in one of North America’s most talked about harness races and add to Gavin Chin’s accomplishments as a breeder when he stars in a match race at Yonkers on Wednesday (New Zealand Time).

The ten-year-old will be driven by UFC Lightweight Champion and superstar fighter Charles Oliveira in his special match race with star reinsman Tim Tetrick at Yonkers Raceway.

The massive success of UFC fighting and Oliveira’s huge profile within the sport has combined with his love of harness racing to prompt the much talked about match race.

Tetrick will drive the US bred Sumthinboutim from barrier 1 with Oliveria to drive the Chin bred Provocativeprincen from barrier 2 in their mile (1609m) battle.

As the co-breeder of champion pacer Lazarus some may think Chin has just about done everything a breeder can do in harness racing.

But he will add another unique accomplishment to his resume when Provocative Prince stars in Tuesday’s highly anticipated match-race.

“It’s great, he has been going really well up there,” Chin said.”

“He has won about $600,000 since he went to America, he was in the free-for-alls racing against Bit Of A Legend when he first got up there.”

“He has been in claimers lately and he’s been going pretty well, I have been checking his results.”

“Not that long ago he was claimed four weeks in a row, one trainer claimed him twice and now he is at Ron Burke’s.”

Provocative Prince won six races and was placed 14 times before being exported to North America and becoming Provocativeprincen.

A global sporting star, the 31-year-old Oliveira is actively involved in harness racing in his native Brazil when not training for UFC competitions.

The champion fighter got keen on the trots after being introduced to the sport by a friend.

“A friend of mine brought me to the racetrack,and I saw the first time I went to the races, this is my passion, for sure,” Oliveira said through a translator in a recent interview.

“Horses are my passion, when I get the opportunity, when I have time between training, I try to go race my horses.”

Oliveira’s passion for harness racing became much more well known when it was the subject of a recent UFC video.

The lightweight fighter said working with his horses gives him a big boost.

“When you ride (behind) a horse, when you brush them, give them a bath, it makes me feel peaceful.”

“If things aren’t going great at home, if I’ve lost a fight or something, any problem at all, I come here and ride the horses and I feel reinvigorated.”

“When you grab the lines, you feel you and the horse are the same. It’s a hundred percent connection.”

Oliveria has a big task on his hands to beat Tetrick, North America’s third all-time leading stakes winning driver with US$232 million in prizemoney.

Oliveria and Tetrick’s match race is scheduled for 11.55am on Wednesday (New Zealand Time).

It will be shown on the U.S. Trotting Association’s Facebook page.

The remainder of the Yonkers card will be open for betting in New Zealand and will be broadcast on Trackside 2.

Check out Oliveria’s UFC video on his passion for harness racing at https://www.youtube.com/watch?v=0jOHN0ijCwk