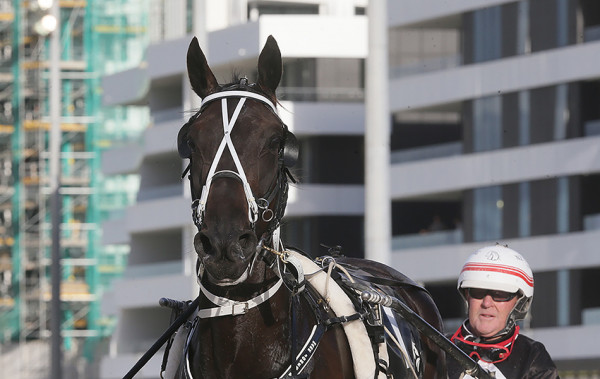 It was a case of mission accomplished for Plutonium Lady on Friday night when winning the Listed Magness Benrow NZSS Northern Mares Classic (2200m).

While victorious on Friday night, Plutonium Lady didn’t have everything in her favour.

The daughter of Bettor’s Delight was trapped three-wide after being caught in a speed duel from her wide barrier early on and driver Maurice McKendry elected to press forward with his charge to sit parked.

Plutonium Lady found the back of leader Need You Now, courtesy of a tiring Adieu Flirt, in the closing stages and was able to take advantage of the passing lane and wear down Need You Now to win by 1-1/4 lengths.

“She went good and Maurice drove her well,” Jones said.

“They (Need You Now and Plutonium Lady) were the two class horses (of the field), and she (Plutonium Lady) had to do a bit of work and had to sit parked, so probably the better horse won on the night.

“It was a good one to get and it’s mission accomplished up there.”

“She seems pretty confident at the moment. Jeremy Young does a good job with her up there, so it has worked out well.”

While the broodmare paddock is beckoning the regally-bred mare next season, she still has a number of stakes targets ahead of her this campaign.

“There is a speed series down south in a couple of weeks, so she will go down for that, then get ready for the Jewels and then probably go in-foal next season,” Jones said.

Later that the night Jones was disappointed when talented filly La Rosa broke in the early stages of the Gr.1 2021 Pascoes The Jewellers Northern Oaks (2700m), costing her all chance in the northern Classic.

“She picked a bad night to do it,” Jones said. “She has had a history of doing that and she picked two bad nights to do it on.

“You have just got to turn the page and move on. It’s frustrating, but you can’t do much about it.

“She will come home and get ready for the Nevele R and the Oaks down here.”

The Betterthancheddar filly was given a perfect trip in the trail by driver Joshua Dickie, who was able to navigate his way around the tiring Tick Tock Go with 400m to go.

She hit the lead rounding the final bend and made light work of her opposition in the home straight, beating Dance Till Dawn by 3-1/2 lengths, with Chevrons Bypass a further neck back in third.