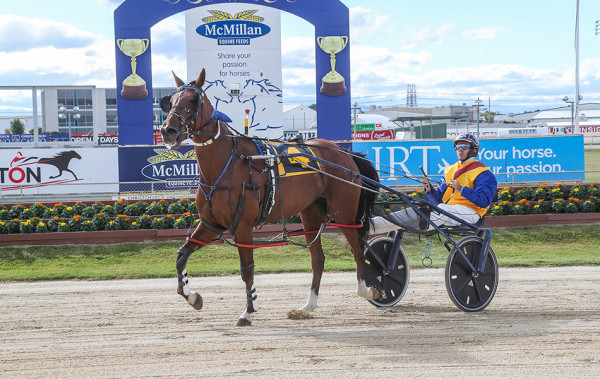 Rangiora pacer Madame Frost bolted in at Addington on Friday night to seal her future as a broodmare.

The Erin Crawford trained seven-year-old worked hard in the early stages on her 2600m assignment to hold the lead before shrugging off that extra effort at the top of the straight and going on to win by four lengths.

Though she earned a nice winner’s cheque from Friday night’s $10,000 race, part-owner Greg Wright joked that the win might end up costing him and his fellow owners, wife Annette and Dawn McLaughlan, money.

“Unfortunately the fourth win is going to cost me money because if she won four I promised my son in law I would breed from her.”

“And he is going to hold me to that.”

Madame Frost ran home smartly for fourth from a long way off the pace in her previous outing on her home track at Rangiora.

Driver Kyle Cameron made sure she was never going to be too far out of her ground with an aggressive steer to hold the lead on Friday night.

“She has been a bit unlucky in her last four or five starts, so it was good to see her get away nicely and keep on trucking,” Wright said.

Madame Frost is continuing an association between the Wright family and the family of her dam Fulham Frost’s trainer, part-owner and breeder, the late Bill McLaughlan and his wife Dawn.

“That horse and I go back 16 years, Bill McLaughlan and I bred her mother.”

“Fulham Frost won her first race at Westport on the middle day, after Boxing Day, and she won exactly the same race 16 years later.”

“She races in Bill’s colours because Dawn has got part-ownership of her.”

“It is just a nice bit of family tradition, really.”

Madame Frost will head back to the West Coast next week in search of more success.

“She is off to Westport on Friday and then we will probably start looking at Rangiora.”

Following her upcoming trip it is hoped Wright, who is president of the Rangiora Harness Racing Club, can enjoy a win at his home track.

“Rangiora have got two meetings in April, so I would like to race her there.”