Norman gets a double 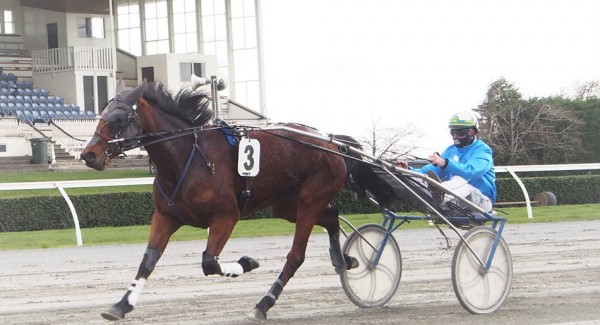 The three-year-old daughter of Muscle Hill led from the start of the 2200 metre stand and ran her rivals off their feet, beating Eilish Hall by five and a quarter lengths.

“I thought she was ready. She’s a good enough horse but we had problems with her urine last season. But she’s had a good enough break,” said Norman.

Sacred Mountain is out of Sundon mare Aceofdiamonds and is a half-sister to Sky Commander, the winner of three races for Norman and another thirteen in Australia. He’s been Group placed and ran second in the 2015 Victoria Trotting Derby.

Ace Commander is another good performer out of Aceofdiamonds. He too was trained by Norman before Ray Green took up the reins. He won five races here before heading to Australia where he started twice.

“She’s got as much ability as they both had.”

Norman shares in the ownership of Sacred Mountain with Shane Fogie and Jason Coutts.

“She came in on the same day as Sacred Mountain, but she’s had a couple of foot infections and missed a bit of work. I got her worked for a few days and then she missed another three but she was fitter than I thought.”

She won by a nose, beating a very brave King Cassidy.