No rain on Williamson's Addington parade

A week of wild weather wasn’t enough to stop the Williamson trotters at Addington on Thursday night.

Matthew Williamson made two trips to the winner’s circle, saluting in his own colours with Winning Bones before doubling up with Jimmy Carter, trained by his father Phil.

A downpour of rain across Otago didn’t make training in Oamaru easy this week, but the performances of the Williamsons’ horses didn’t reflect that.

“The weather made for a challenging week, we had over 100ml of rain but everyone pitched in and we got through it,” Matthew Williamson said. 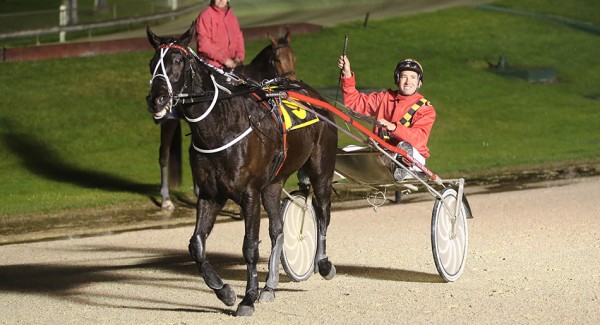 Winning Bones made it back-to-back wins when leading throughout to win race 5.

Both victories have come in 1980m mobiles.

“He has been doing a great job right through the season,” Williamson said.

“He loves a mobile and being up on the speed and he’s got the job done the last two weeks.”

“It looked a winnable race tonight and I’m really proud of the way he is going at the moment.”

“He will cop a few rating points for that and he might find it hard for a while, but it’s just great to have him going so well for the syndicate that own him.”

“Gerald Cayford is in charge of things and he’s been a big supporter of the stable and he’s got a great group of people in the syndicate.”

Jimmy Carter did what Jimmy Carter can do when Williamson drove him to victory in race 8.

When the trotter steps away and does things right he can show off his big motor.

But he can often get things wrong when the tapes fly.

Thankfully for his owners, the seven-year-old was faultless on Thursday night.

“It is all about the first five steps with him, he was one of the better horses in that race so once he got away I was quite confident he could get the job done.”

Until this year, Williamson has spent many winters tripping to Forbury Park.

The moving of South Island’s winter harness racing to Addington has had its upside for the horseman now he that he is training a bigger team of his own.

“It is obviously a longer drive to Addington, but there is very good stake money on offer so that makes it worthwhile.”

“I do miss Forbury because certain horses had their place there and we had a lot of good results there.”

The Oamaru trainer has also produced nine winners from his stable.