Four-time New Zealand Cup-winning driver Todd Mitchell's having a September to remember! Yesterday the man they call "The Wizard" turned 50, just 11 days after reining his 1200th winner when Girls Are Best won at Cambridge. His New Zealand Cup winners were Homin Hosed (1999), Gracious Knight (2002) and Just An Excuse (2003-04).

The latest gavelhouse.com standardbred auction closes at 7pm tonight with nine lots up for sale. Getting the most interest is Australian-based Franco Landry, who’s won seven from 23. Earlier today he’d attracted a bid of $13,000.

Another Franco, former Kiwi Franco Totem is believed to have become the fastest ever progeny of 2008 New Zealand Cup winner Changeover. The now seven-year-old (Changeover – Franco Treaty) had two thirds for Spreydon Lodge in this country before heading to Australia and then North America. At the weekend Franco Totem won in 1:48.2, lowering the 1:48.4 record set by Risk (Changeover – Crafty) in 2018.

Shes Pukka has chalked up win number 21, in the United States. By Betterthancheddar out of Pukpuk Princess the five-year-old mare was in winning form at Harrah’s Philadelphia at the weekend. Before heading overseas Shes Pukka won two from four starts for trainer Glen Harwood.

A few weeks ago we brought you the story of Tracey Knapp and her love of her standardbred Sioux Eyre. In the story she mentioned that she was planning to get a tattoo of his brand. And to prove that she is as good as her word here is the tattoo in question. Tracey – now that’s dedication. 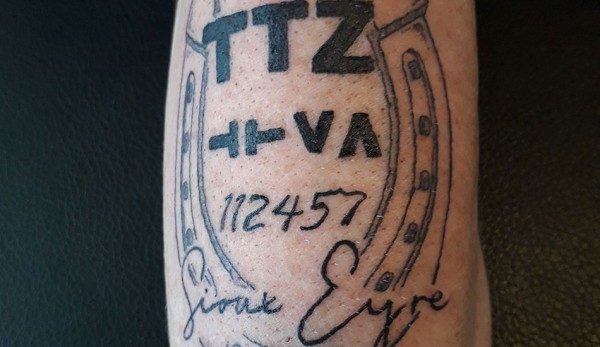 Forbury Park’s clearance sale has been delayed again, and will now go ahead on Wednesday, October 13 providing Dunedin is at Alert Level One. Around 400 items will go under the hammer from 1pm. The sale was originally scheduled for early September and then September 24 but Covid restrictions have put paid to those dates.

The Geraldine Trotting Club is holding workouts this Saturday, September 18 at 10am. Entries close on Friday at 3 pm. To enter phone Laraine Marshall 03 36938419