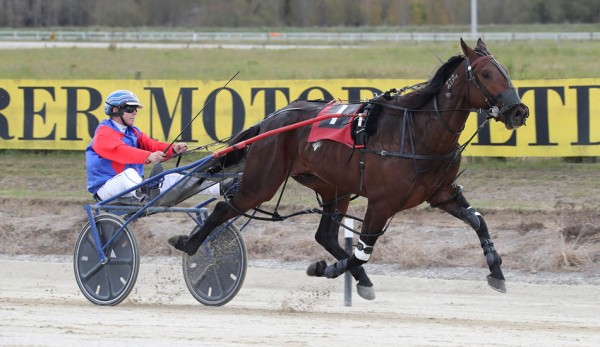 Hay cashes in at Rangiora

Wheels Of Fortune's commanding win at Rangiora on Sunday brought up 600 training successes for John Hay. The Ashburton-based trainer-driver took the three year old straight to the front. The result was never in doubt as they won by more than three lengths. Hay's 600 training wins have come from 4193 starts going back to the early 1980s. Hay's also driven 1119 winners. Over the years Hay's been associated with many of the Franco horses from when he trained at Spreydon Lodge. Among his highlights was winning the Cyril Hay Memorial Trot named after his father in 2019 with Rebel Kibbybones at his home track, Ashburton.

Self Assured raking it in

It's only the first week of May but Self Assured is on the brink of being a half million dollar earner in 2022. So far this year he's won $495,500 after his last start second to Australasian visitor Majestic Cruiser in the Messenger at Alexandra Park on Friday night. Self Assured has had eight starts this year for five wins, two seconds and a third. The country's top trotter Sundees Son has won $176,625 so far in 2022 with six wins and two seconds in eight starts.

A nine race winner for trainer Arna Donnelly in this country, C K Spur is proving near unbeatable in South Australia. Since arriving in the state last September the eight-year-old son of Pegasus Spur has won seven of eight stars including the South Australian Trotters' Cup at the weekend, despite starting off 50 metres.

Star juvenile back at Bendigo

Last season’s Aussie 2YO of the Year and one of the leading contenders for next year's The Eureka, Catch A Wave, steps out again at Bendigo on Thursday night. The Andy and Kate Gath-trained gelding made it seven wins from eight starts when he returned from a lengthy spell and beat older horses in at Hamilton on April 18. But it won’t be easy tomorrow from an outside draw (gate seven) over the short 1650m. The first ever $2.13m Eureka slots race at Menangle will be Australia's richest harness race but will be limited only to Australian bred three and four-year-olds.

Top Southland trainer Kirstin Barclay's on the look out for staff. She has a vacancy for a full-time worker who can confidently handle and drive young horses and do other general duties. Barclay has trained 13 winners so far this year and has a number of quality horses in her barn including Love On The Rocks, Tommy Waterhouse and Macandrew Aviator.