Gun four-year-old One Change has returned to Hayden Cullen’s Rolleston stables, after a successful stint across the Tasman. Placed at Group level, he also won eight from 15. He last raced in this country when second to Copy That in the Group Two Vero Stakes at Addington in March last year. He’s had 16 wins from 29 starts and stakes of over $600,000.

Harness Racing New Zealand’s long-serving track and venue inspector John Denton has been made a life member of the NZ Racecourse Managers Association. He received the award at a ceremony in this week in Hamilton. 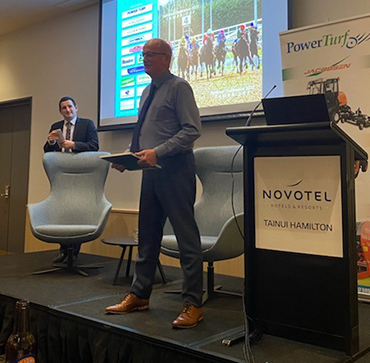 New HRNZ handbook on its way

Winning debut for the Bird

The Bird Dance N has won his first start in North America, winning at Plainville Massachusetts by more than two lengths in 1:50.1. The five-year-old had two wins in five starts down south for trainer Murray Brown and driver Brent Barclay before going to Australia two years ago. His record before going to the USA was 17 wins from 31 starts. And fellow former Kiwi Delishka N has had her fourth straight victory, in Pennsylvania, beating among others, top racemare Watch Me Now.

Comeback on cards for Ride High

Sidelined superstar Ride High may yet make a comeback. Co-trainer Clayton Tonkin says “terrific” scans last week had significantly boosted his confidence the powerhouse pacer could be back racing by November. Ride High suffered just his second defeat in 18 starts when fifth in the Smoken Up Sprint at his last start on October 3, last year. He was subsequently found to have sustained injuries in both front tendons.

Macca Lodge co-proprietor Sheree McIntyre has an interesting sidelight to her main job. She is also the chairperson of the Hokonui Fashion Awards that were held in Gore last Friday and Saturday. It was the 32nd year they have been held. An item on the long-running awards was featured on One’s Seven Sharp programme this week.