Harrison and friends on the mend

All four people, including leading junior driver Alicia Harrison, who were injured in an horrific crash in the Waikato, have been discharged from hospital and are recovering at home. Also in the car was Danielle Green, who works with Harrison at Arna Donnelly's Cambridge stables. The four were travelling to Auckland on Saturday January 22 when they were hit by an on-coming ute. Harrison is still sore but feeling ok and is expected to be away from race day driving for the next few months.

A month into 2022 and it’s tight at the top of the trainer's premiership with Robert and Jenna Dunn on 13 wins, and Steve and Amanda Telfer and Greg and Nine Hope both on 11. Blair Orange has a seven win lead in the driver's premiership over John Dunn (16), with Ben Hope third on 10.

Dunn in the sun

As New York and its surrounding areas freeze, and race meetings at the Meadowlands and Yonkers have been cancelled because of snow storms, Dexter Dunn is soaking up the sunshine. The 10-time Kiwi champion driver is having a relaxed start to 2022. In a recent interview he said he was enjoying spending time at Delray Beach in Florida and that he would be back race driving "sooner rather than later". Last year he had 2199 drives and was second only in stakes to Tim Tetrick.

Kaikoura Cup back, and ok

The mystery of the Kaikoura Cup has been solved. The club sent out a Facebook message asking if anyone had seen it as it hadn’t been sighted since 2020. Now president Ben Smith has received a text to say it’s been found safe and well, and he's delighted. Classie Brigade has been the king of South Bay for the last three years. 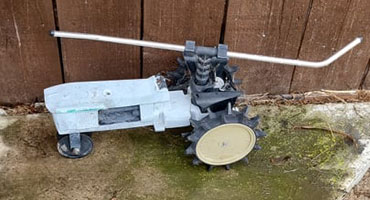 The things you see

It’s funny what you see while on the NZB Standardbred Yearling on-farm visits. During the Canterbury visits this week we spotted a sprinkler masquerading as a tractor, or is a tractor masquerading as a sprinkler? Either way we think it's pretty cool. The sales will feature 415 yearlings at Karaka and Christchurch from Feb 13-16.