Two decades after his first season, John Dunn is poised for his most successful season yet. He reined home winner number 100 for the season with the Gavin Burgess-trained Rocknsnap at Banks Peninsula on Monday. It’s the fourth time he’s hit three figures in one season and he now looks set to eclipse his previous best of 109 in 2016. He’s had 1265 wins altogether since his first, Scotlynn Jag at Franklin in 2001. “I’m not going too bad,” Dunn said post race, adding his best victory was probably Sundees Son’s win the Dominion.

Dibaba goes 7 in a row

A change of scene has very literally produced a massive change in fortune for Dibaba and her Australian-based Kiwi trainer Jack Trainor. Last season the mare went 51 races without winning but after a move from Western Australia to a much kinder handicapping system in New South Wales she has now gone seven from seven. At the weekend she won at Penrith paying $1.04. The horse should not be confused for the former Chmiel-trained pacer who won seven from 26 here before being sold to North America. 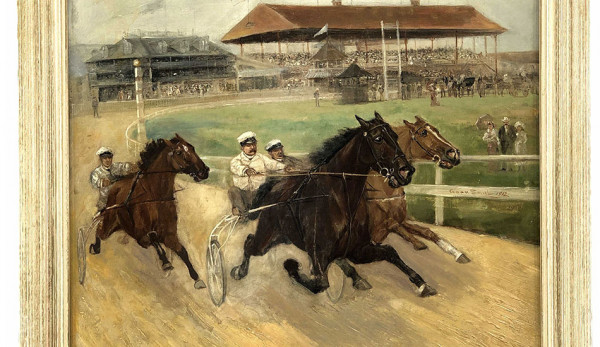 What is being billed as a rare painting of one of harness racing’s great champions is being offered up for auction in the USA. It’s by noted artist Gean Smith and it depicts the champion horse of the early 1900s Dan Patch winning at Readville Trotting Park in Massachusetts. Dan Patch was the sport’s undoubted superstar at the time, remarkably winning all 73 races he contested. The painting will go under the hammer in Arizona this weekend, with the top bid currently at $US1250.

The Methven Club is gearing up for its penultimate meeting of the year on Sunday April 11 at the picturesque Mt. Harding racecourse. It will be a mainly low key meeting with the highlight being the Woodlands Mt.Hutt Cup run over 3,000m for the developing staying types.
The theme of the day will be club members, with all members invited to the Goodwin Lounge for a day of light refreshments, a few giveaways and a chance to reminisce about days of old. At this stage it is hoped all life members and past presidents will be present and available for a chat. Included is one gentleman talented enough to drive in a race against legendary reinsman Peter Wolfenden,run in a race against New Zealand’s best ever runner Peter Snell and play provincial rugby against New Zealand’s most famous footballer Colin Meads. Anyone wishing to come who is not a member simply needs to duck into the secretary’s office fill in a form and pay $15 to join the club and thus eligible to enter the Goodwin Lounge on the day.

See you Sunday at Mt. Harding at 12 noon where remember the sun always shines -
Mike Heenan for Methven Trotting Club.