Korbyn Newman started his training career in the best possible fashion when producing Moons Way to win at Ashburton on Sunday.

The five-year-old gave his rookie trainer his first win with his first starter when turning his manners around with a faultless performance to win race 1.

Though racegoers are yet to see Newman’s new trainer’s silks yet, the trainer-driver wore the Blue September campaign colours, raising $800 for prostate cancer research with his victory.

“It was great, it couldn’t have been better, really,” Newman said.

“He was a little bit rough going into the first bend but he held it together,” 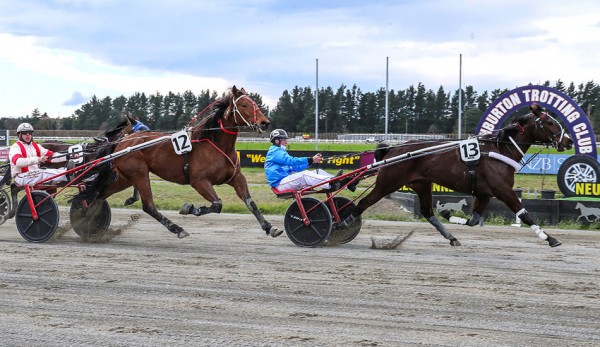 Moons Way had made plenty of errors in his seven previous starts but showed signs he was thriving since joining Newman’s barn when trialling well at Rangiora recently.

More of a stayer than a sprinter, the trainer-driver put the trotter up on the speed and he simply kept on trucking.

“He seems to keep going, he doesn’t seem to have a lot of speed, but he keeps going.”

“He ran home in 28sec (400m) with a tail wind, so he doesn’t have a heap of speed but he does keep ticking along at his own speed.”

Newman trains Moons Way while also busy with his work as a key team member with the Robert and Jenna Dunn stable.

In his first full year with their team, the reinsman enjoyed a career best season with 23 wins last term.

“Robert and Johnny have been really good to me and they’ve set my career alight at the moment.”

“They have put me on a few good horses and given me a lot of race drives and a lot of wins.”

“I have got a lot to thank them for, they have sent me on my way a bit.”

“Even with this horse, Johnny helps me out, so they have been really good to me.”

With the talent currently in the Dunn camp, Newman could find himself driving in feature races this spring.

If the chance comes along the reinsman would welcome it with open arms.

“They have got a few nice horse there, I just drive the ones that they tell me to drive.”

“If the opportunity comes along I will take it by the horns and hopefully do a good job.”

Moons Way is the only horse Newman has in work at the moment.

The trainer said he is not actively looking to take more on just yet, but wouldn’t turn down another horse if the opportunity arose.