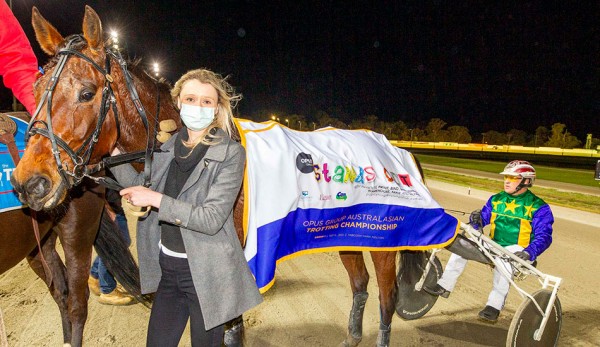 Just for good measure, he was driven by one of NZ’s all-time great drivers, Anthony Butt.

It was his biggest win since moving across to join the Jess Tubbs and Greg Sugars stable.

But back to Maori Law, who worked to the front early, sat on the emerging Cover Of Darkness and charged home along the sprint lane to snatch victory in the last-stride over emerging stars Im Ready Jet and Majestuoso.

The win was big because Cover Of Darkness stopped sharply and cost Maori Law lots of momentum as Im Ready Jet and Majestuoso looked set to fight it out.

Raced by Fred Crews, the eight-year-old Maori Law has shown signs of being back to his very best form with two wins and some other nice efforts in just seven runs for Team Brosnan.

“We’re thrilled with how he’s come back. It’s a huge credit to Emmett and Richard,” Crews said.

Im Ready Jet underlined her huge potential when the four-year-old mare sat parked most of the trip and went down by a half-head.

Majestuoso, who won the race last year, loomed at the winner on the home bend, but just peaked on his run. He was only beaten a half-head and a head in third spot.

On Triple Eight, driver Greg Sugars landed one spot further back than he hoped (one-out, two-back), but his cause was boosted when the leaders, including favourite General Dodge, scorched a 2.8sec lead time and 26.6sec first quarter in the 1650m race.

General Dodge led, but then took a trail on Max Delight. He got the inside run late, but didn’t explode through after spending so much early petrol.

It was still a fantastic run for second at just his 20th career start and first-up from more than three months out.

Triple Eight scored by 4.1m in a slick 1min51.7sec mile rate, but it was well outside Ride High’s 1min49sec track record.

In 10 starts for Tubbs and Sugars, Triple Eight has won four times, been placed twice and banked almost $110,000.

“I’m so proud of him tonight and Greg drove him so well, as always,” Tubbs said. “I’m thrilled for the owners and shattered they can’t be here.”

Sugars added: “This is fantastic. I’ve really only driven the horse at the races this campaign, Jess has done all the work at home. I’m so proud of her.”

The former Kiwi four-year-old made it 17 wins from just 19 starts and five from five this campaign when he just staved-off a late surge from classy veteran Vampiro to win the $50,000 Group 2 James Brennan Memorial.

Vampiro crossed Magnificent Storm early, but the favourite then did a "re-take" and controlled the race before Vampiro came off his back and flew late to miss by just a head.

The race was really just a 300m dash home.

If trainer Ray Williams is happy with Magnficent Storm, he will back-up again at Gloucester Park on Friday night before having a short let-up. 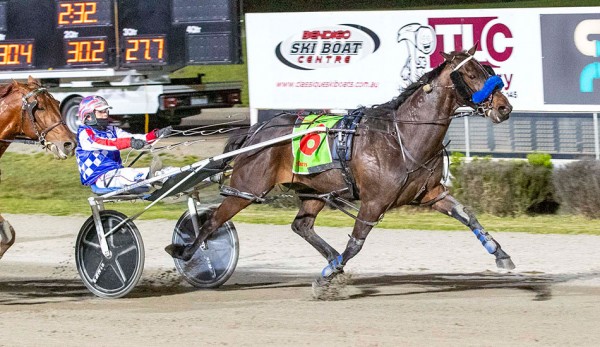 That was the run trainer Andy Gath has been waiting for Tango Tara to get.

Gath really likes the classy former Kiwi, but has lamented having to drive him “upside down” a lot in his first Aussie campaign as he goes through the grades.

“I’ve always said we’ll see his best when he gets into the better races and he doesn’t have to do all the work himself or lead,” he said.

Tango Tara camped off a hot early tempo, came three-wide without cover at the 1200m and simply outclassed a good field in the fifth race at Bendigo.

Despite covering extra ground late, he had them covered on the home bend and won by 2.1m in a slick 1min54.9sec mile rate for 2150m.

He’s essentially through to open-class now and despite the obvious rise in grade, if he gets the sort of trip he did, he’ll win his share of free-for-alls.

And Victoria’s lucrative Country Cups Carnival is also just around the corner.

Malcolms Rhythm was second past the post, but got the race on protest because the “winner” Rusty Crackers galloped and interfered with several runners straightening for home before recovering to win.

Malcolms Rhythm certainly deserved a win after some good efforts during his five-race Menangle campaign.

Ash Hart drove Malcolms Rhythn, while her brother, Cam, continued his fantastic season with another double.

The second leg of double came with an all-the-way win aboard Rickie Alchin’s trotter Indefensible in race seven.

The interesting runner in that race was recent Kiwi import One Majic Kenny, who galloped a couple of times early from the stand, but didn’t really fire after and finished a well-held fifth on debut for Blake Fitzpatrick.

Queensland's Winter Carnival just came around a tad too early for Will The Wizard.

Chantal Turpin’s four-year-old has always oozed potential, but is only now starting to put it all together.

His Albion Park win was something to behold.

The son of the ill-fated Will The Wizard buzzed to the front from gate four and just kept running for a 1min50.6sec mile rate over 1660m.

To give it context, that was just 0.2sec outside the track record held jointly by Im Themightyquinn and Cruz.

Since the Carnival finished, Will The Wizard’s raced three times for a very close second and two terrific wins.

Two of the major Victoria Derby contenders turned-on a ripper contest at Bendigo.

Major Moth was first-up since finishing third in the Group 1 Vicbred final back on New Year’s Eve. He was found to have had a few issues.

Bondi Lockdown worked to the front, dictated with a cosy 61.4sec middle half and blasted home in 54.5 and 27.5sec.

Major Moth drifted back to last from a wide draw, moved to sit parked at the 1100m and never stepped trying hard to get within 4.7m at the finish.

Bondi Lockdown, already a Group 1 winner at Melton earlier this year, is now starting to put it all together more consistently and pace better for trainer-driver Aaron Dunn.