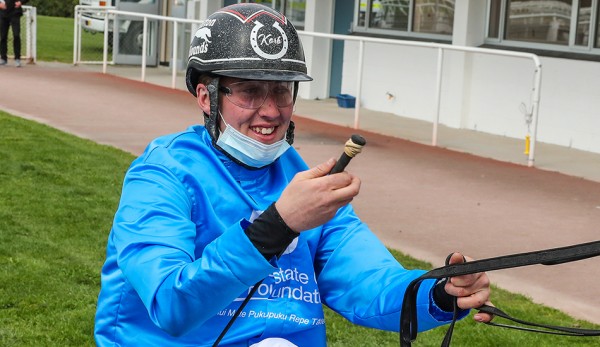 This is the first year HRNZ has partnered with the annual Prostate Cancer Foundation fundraiser. Ten drivers are involved, with HRNZ and individual clubs contributing $100 to each of their wins.

Drivers add to the total by having their own personal supporters as well.

Yesterday at the Methven Trotting Club’s meeting at Ashburton ambassador Korbyn Newman had a day he’ll never forget – he trained his first winner when driving Moons Way to victory in the Ski Time Mt Hutt Trot.

As well as being a fledgling trainer Newman works for Robert Dunn at Woodend beach, and the champion trainer is supporting Newman to the tune of

$100 for every win. He decided to double that to $200 to mark Newman’s breakthrough success.

In all Newman raised $800 for his maiden training success.

Another having his first win for Blue September was Southland-based Mark Hurrell. He raised $1400 when Sweetart won race 3 at Wyndham on Thursday.

Champion driver Blair Orange also chimed in with $300 from Addington on Friday, winning with Talent Agent in Race 1.

This week there are four more meetings with Auckland (at Cambridge) and Wyndham on Thursday, Addington on Friday and Oamaru (Hannon Memorial) on Sunday.