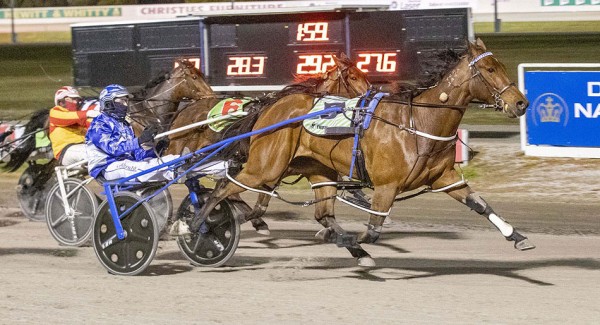 Nathan Purdon can’t wait to return “home” to notch up the next milestone of his blossoming training career.

It was confirmed today that Purdon’s brilliant mare Spellbound would fill the “Hole in the Wall” slot in the inaugural $900,000 The Race at Cambridge on April 14.

It’s so fitting that Spellbound will be the pacer to give Purdon his first crack at winning a big race back in NZ since moving to Australia to continue his career about 16 months ago.

“Amazing Dream has been my headline horse in the eyes of most, but this mare has been so special to Mikayla (Lewis, Purdon’s partner) and I … she was the mare who really got us started. She’s done such a fantastic job over here (Australia) and she’s still on the up, I think,” Purdon said.

Spellbound’s 17 starts for Purdon in Australia have returned nine wins, five seconds and a third.

Stylish Memphis had already been confirmed as a starter in The Race, along with Krug, Pembrook Playboy, Self Assured, and Hot And Treacherous.

Spellbound has also run seconds in the Vicbred 4YO Final, Queen of The Pacific and Golden Girl at Group 1 level for Purdon.

Purdon turned her out for a spell after that barnstorming Ladyship Mile run before the call came with an invite to The Race.

“John Green’s involved in this group and he got me just in time. She’s had 10 days in the paddock, but she’s such an athlete and comes to hand so quickly, we’ll have her primed for this race,” Purdon said.

“She’ll only need four or five hopple runs and she’ll be back where she left off.

“There’s a flight on March 31 and Mikayla will travel across with her. I’ll probably just go for the race itself.”

Purdon said it was hoped Tony Herlihy would drive Spellbound in The Race.

“The preferential draw for mares and the 2200m make it an attractive race for her,” Purdon said.

“Give her a soft run on the speed and she’s so quick she can match it with anything off the right sort of trip.

“It’s really exciting to be taking a nice horse back home for a big race.”