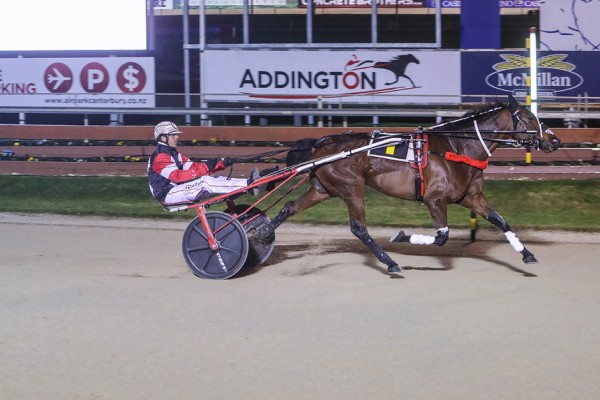 Champion trotter Sundees Son is about to be given his shot at the Australians and will head north for a surprise campaign before crossing the Tasman.

The record-smashing Dominion winner returned to the trials at Ashburton as his summer is about to get a lot busier than originally intended.

“He trotted well and did everything we wanted,” said driver John Dunn.

The reason Sundees Son was trialling was because Team Dunn will send him north to contest the Greenlane Cup at Alexandra Park on December 31, where he will clash with Bolt For Brilliance to add some real glamour to the re-shaped New Year’s Eve meeting.

“We will confirm it all after he races up north but the plan is now to take him to Victoria,” says Dunn.

“So if he races well up north he can go over for the Dullard Cup and the Great Southern Star.”

The Dullard is worth A$50,000 at Melton on January 29 while the Great Southern Star has two A$50,000 heats and a A$300,000 final on the same night, February 4 also at Melton.
That is the night before the Hunter Cup meeting where New Zealand Cup winner Copy That will fly the Kiwi flag.

Sundees Son has never raced in Australia and while he is undoubtedly the best trotter in Australasia the Great Southern Star will provide a unique challenge because he as been most vulnerable in sprint races against natural leaders like Majestic Man.

The latter heads back to Victoria with caretaker trainer Anthony Butt after his Inter Dominion second and while he is not as talented as Sundees Son he is ideally suited to the fast twitch racing around the Melton track smaller than Sundees Son is used to.

But Sundees Son looks sounder and has trotted more squarely in his last two starts than probably at any other stage of his career and when in that state he actually has the gate speed to adapt to Australian racing. That is why the 2200m race at Cambridge on January 13 could be a perfect dress rehearsal as it is the closest thing New Zealand has to a sprint race around Melton in track size and racing style.

While Majestic Man will be waiting for his old nemesis in Victoria whether Bolt For Brilliance, who was being considered for the same races, heads there now may depend on how his two clashes with Sundees Son over the New Year period go.

There are also A$50,000 and A$100,000 feature trots at Melton in the three weeks after the Great Southern Star meaning the New Zealand trotters could race for A$550,000 at Melton in
a month before returning home to race for another $450,000 at home in the autumn, giving them over A$1million in targets in just four months.