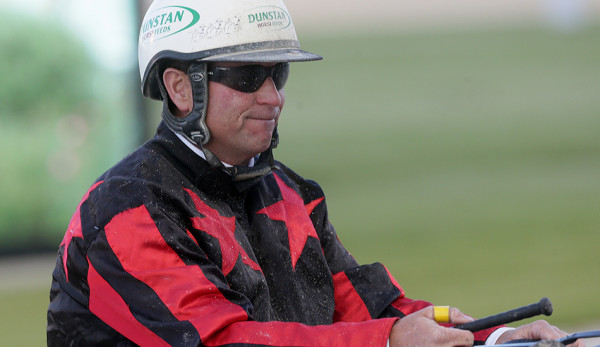 Driving Milliondollarmonkey to victory in the deep South on Saturday added a special touch when Peter Ferguson joined an elite club of outstanding reinsman to have won 2000 races in New Zealand.

Ferguson had time to decide how to celebrate the milestone victory when the Regan Todd trained trotter went to the line untested to win race 6 at Oamaru by more than two lengths.

With four wins in five days to bring up his 2000th victory, there was little waiting around in the nervous 1990s for Ferguson.

And he thought that was ideal.

“It has been a goal of mine for a little while, I thought I would have had it done and dusted before the end of last season with the way my drives were going."

”It is good to get it over and done with relatively quickly rather than sitting around.”

“As much as it creates interest, it doesn’t really interest me.”

His 2000th victory came more than 34 years after Ferguson set on his journey to become one of New Zealand’s most winning reinsman.

The then junior driver drove Sobriety, trained by his father Barry, to victory to win a 3200m maiden event at a Te Awamutu Trotting Club meeting in 1986.

Ferguson went on to win four consecutive national junior drivers’ premierships between the 1988 and 1991 seasons.

A key part of his first all-comers’ premiership victory came through the reinsman regularly driving and racking up wins in Otago and Southland.
And that added a special touch to Ferguson’s 2000th win milestone.

“I met some great friends when I drove down there.”

“It was quite unusual and unique in the sense that I have driven at Oamaru, but I have never driven on the grass at Oamaru.”

“Having driven a lot of winners for a lot of nice people and having met a lot of good friends it was nice to do it in that area.”

As people rushed to congratulate Ferguson on his achievement at Oamaru on Saturday, one handshake stood out.

“A guy came up to me shook my hand and I didn’t recognise him.”

“He said you drove two horses for me at Forbury Park one night and you gave me a spray because I had the gear on one wrong.”

“You told me what to do and I changed the gear and the next week it won at Gore.”

“Those are the sort of stories you have down there because the people are great.”

“That actually capped my day.”

Ferguson’s win last win in the national premiership saw him represent New Zealand in the World Drivers Championships in Norway.

Earlier in his career, Ferguson seized an important opportunity and cemented himself as a star of the future by winning the group 1 Television NZ Mile behind Cinimod Junior in 1987, while still a junior licence holder.

The reinsman credits the horse’s trainer Ken Webber for playing a vital role in his career.

“To be honest and without being silly, without Ken I wouldn’t be here [winning 2000 races].”

“Ken showed faith in me as a young guy that was probably unprecedented.”

“Also, you are lucky if you get involved in big stables along the way.”

“Doug Gale, obviously, I would have driven a lot of winners for him.”

“If you drive for the big stables with a bit of ammunition it keeps your name up there, which means you get other drives.”

“Gareth Dixon had a good team going and Michelle Wallis and Bernie Hackett had some nice horses.”

“I drove a lot of winners for Pat and Mike O’Brien, too.”

“And in recent times the small number I drive for RJ [Robert Dunn] makes a real difference to your profile.”

Another Auckland Cup win came in 2006 with Mi Muchacho.

The tough grey pacer rates as the best horse Ferguson has driven.

“It is hard to compare horses from different age groups and different eras, but Mi Muchacho would be the best horse I have driven.”

“He overcame a lot of issues and probably should have won a New Zealand Cup.”

“It was probably my only chance to win a New Zealand Cup, but that is the way it went.”

“He went on to win an Auckland Cup when he hadn’t raced for three months.”

23 years after his first, Ferguson would win yet another Auckland Cup, but not in the harness code.

After taking out his greyhound trainer’s licence and developing an excellent winning strike-rate, the reinsman prepared Silenci to win the Auckland Cup for greyhounds this year.

Gold Ace was another key contributor to Ferguson’s big race haul in the sulky.

The now-retired stallion won a treble of group 1 victories, including his win in the 2011 New Zealand Derby.

With a glittering resume, Ferguson has little to prove in harness racing.

But he still has the desire to keep driving winners.

Though he admitted watching his son Dylan’s success alongside his wife Wendy outweighs the thrills he gets from his own achievements.

“Dylan has been successful and that is a big thrill for Wendy and I.”

“Even from the time he was at school, Wendy would get up at 6am and take him to Todd Mitchell’s before he could even drive [a car].”

“And he had only just started high school.”

“He would take his clothes and work there until 8.30 and get changed then Wendy would drop him at school.”

“He just loves it, he eats breathes and sleeps it.”

“Rogie [Graeme Rogerson] has been great to him.”

“For us to enjoy his success is probably as good as winning a group 1 for me nowadays.”