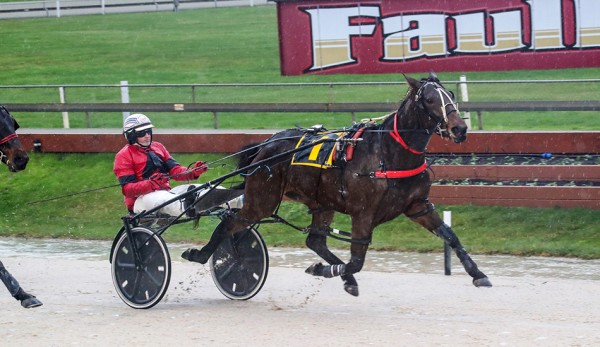 Bruce Negus continued his pleasing season at Addington Raceway on Sunday when recording a winning double, boosting his winning tally to 26 this term.

The Burnham trainer bookended the meeting courtesy of Dreaminsover in the Mid-Winter At Addington (Amateur Drivers) Mobile Pace (2600m) and Dashtothebeach in the First Direct Taxis Mobile Pace (1980m).

Dreaminsover appears to have found his grade in the amateur races and has developed a great association with northern amateur reinswoman Cheree Wigg, with the partnership recording four wins to date after Sunday’s victory.

They had to do it tough in their latest outing, sitting parked for the first lap before securing the trail at the bell. Dreaminsover was then able to utilise the passing lane and hold off Franco Hoffman to win by a half-neck.

“I thought he was extraordinarily brave,” Negus said. “It looked a tough run, but he loves a good fight.

“He shouldn’t have paid that money ($25) because he has been going great races with no luck. I was pretty confident he could go a good race, and running 3.15, parked for a lap, he deserved it.”

Negus was also pleased with Dashtothebeach’s win after her front-running performance.

“She was driven to her strengths because she is a pretty tough stayer,” he said. “She is a three-year-old filly with a bit of ticker. She is not up to the very top ones, but she is pretty good.”

Negus was on the brink of a treble, however, 13-win mare Sundons Flyer came up a nose short in the Avon City Ford Trot (2600m).

“She just got beaten a nose in the last stride, and normally she isn’t that good in the wet,” Negus said.

The broodmare paddock is beckoning Sundons Flyer, however, Negus said he would like to line her up on New Zealand Cup Day one last time.

“I have been looking for an excuse to retire here for two years, but she keeps going really good races, so she is still racing,” he said.

“I would like to have her in Cup Day because she has won twice and the mark she is on now she would be competitive.

“I will just keep ticking her over. If she wins between now and then we will have to think about that because a foal out of her would probably have some value.”