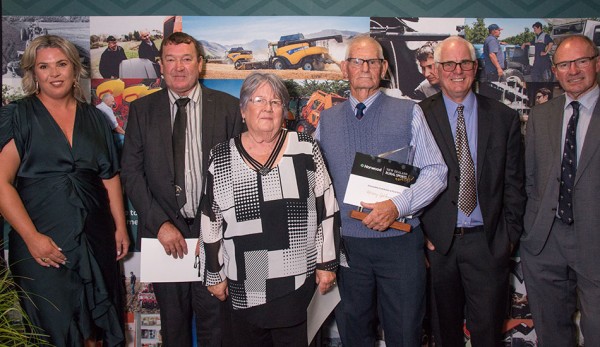 The importance of the Kidz Kartz clubs around the country is now well established as a pathway for introducing young people to the harness racing game.

But it was a real struggle to get the idea off the ground and earlier this year, Taupaki’s Murray and Deneece Goldsworthy were honoured with
sharing the Outstanding Contribution to Rural Sport Award at the Norwood NZ Rural Sports Awards, with national shearing identity Warren White of Waimate.

The awards are held in conjunction with the popular three-day Ford Ranger New Zealand Rural Games in Palmerston North in March.

Kidz Kartz probably would not be around if it wasn’t for the enthusiasm and determination of the Goldsworthys to get it off the ground some 20 years ago, and they’re still heavily involved in the Kumeu club today.

The Rural Games are now in their eighth year and it has become a big annual event in Palmerston North, attracting some 42,000 people over the three days in March.

Auckland’s Steve Hollander is the founder of the Rural Games and due to his passion for harness racing, the industry has been getting an increased presence at the event and awards.

One of the many activities and attractions taking place at the Games is the ‘Zilco Gearing Up’ competition where licence holders are in a race against the clock to gear up a harness horse.

Penny Boyle, who works for Michael House, was the winner of that comp this year and joined the likes of Peter and Dylan Ferguson and Jay Abernethy on that honour roll.

But the public is also invited to have a go at gearing horses up for a bit of fun.

Those familiar with the Kidz Kartz scene in Canterbury will know that pretty much all of the kids involved come from harness racing families and were probably destined to be involved in the industry anyway.

Most would have got a pony for Christmas or a birthday at a very early age.

But that is far from the case with the scene in Auckland, where the Goldsworthys keep 16 ponies on their 10 acre farm and make them available to children who mostly do not come from established harness racing families.

They run a ‘training camp’ twice a week at the Kumeu track, after school on Wednesdays and on Sundays mornings, where a parent is required to attend with a son or daughter and the involvement is very much family orientated.

The kids have to do a three-day course during the Christmas holidays before they’re allowed to compete at races at Alexandra Park or Cambridge once reaching the age of 10.

David Branch was one the original graduates of the northern Kidz Kartz scene and there are many others involved in the industry outside of being recognised reinsman today.

In that respect, Zac Butcher, Dylan Ferguson and Josh Dickie came through Kidz Kartz in the north, and the likes of Ben Hope, Robbie Close, John Morrison and the Tomlinson sisters did so in Canterbury.

The origins of Kidz Kartz in New Zealand was born out of Dave McGowan taking Special Force to Sweden in the winter of 1999.

McGowan came back extolling the benefits of what he saw and while the Goldsworthys hadn’t known him, through racing horses from the stable of Doug Gale, they had gotten to talking to McGowan in the stables.

“I spent about a year and half researching the concept and discovered there were similar sorts of programmes already going in most other countries (that had harness racing),” said Deneece.

“I wanted the club to own the ponies and gear so that any kid that wanted to have a go could do it, rather than just the ‘rich and famous’.

“The sulkies proved problematic because the manufacturers weren’t interested, but Bill Pemberton solved the problem by getting old sulkies off trainers and cutting them up to make them smaller.

“I’d been saving up for a new kitchen, but we spent that money on a truck to transport the ponies around.

“The truck is long gone and I’m still waiting for my kitchen.

“The clubs weren’t very keen on the idea for a good while to say the least and a lot of the trainers were quite dismissive as well.”

But the Goldsworthys got support from people like Gale, Pemberton, Rod Bowker and Bruce Lloyd and eventually Kidz Kartz was allowed to ‘race’ at Alexandra Park.

“Robert Death use to watch us with an eagle eye, but eventually he just left us alone.

“Steve Stockman was very supportive when he became the president at Auckland.

“Soon there were clubs at Franklin and Cambridge and now there’s eight clubs around the country and over 300 children participating at any one time.

“A National Council has been established with a representative from each club.

“Most of the kids we have through our club do not come from harness racing families – they just hear about us through word of mouth and come along to participate in an activity.

“These are city kids that wouldn’t normally be able to have a pony.”

The Goldsworthys first heard about the Rural Sports Awards when Hollander rang them to say they’d been nominated.

They didn’t think they’d hear much more about it, but then Hollander rang again a few weeks later to say they’d made the final cut and would they like to attend the awards dinner in Palmerston North.

By now Doug and Wendy Gale were living at Bulls and they picked up the Goldsworthys from the airport and took them to the venue, which felt like “arriving at the Oscars”.

“We were blown away to share the award with Warren and the rest of the night was just a blur.

“So many people congratulated us and we never knew that so many there had had their children involved in the Kidz Kartz over the years.”

The awards dinner was on the Friday night following a ‘youth day’ which includes the Westpac Agri Futures and the Allflex Clash of the Colleges.

The Goldsworthys spent the next day at the Games before heading home.

But in future they will be making a weekend out of the whole event such was the wonderful experience.