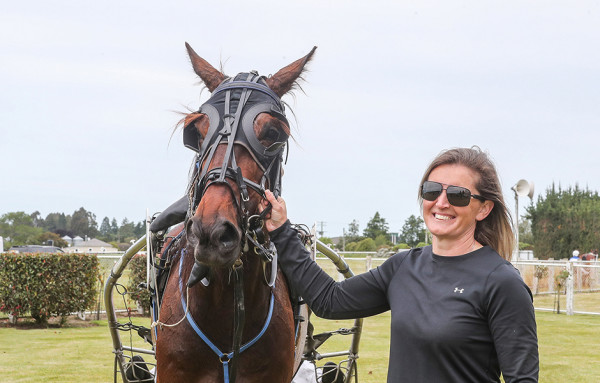 Petra Luzumova got the photo she wanted when Danangus Fella notched her first victory as a trainer at Orari on Saturday.

On the way to the annual Geraldine meeting, the Czech Republic-born horsewoman had one wish.

And when Danangus Fella cleared out to win race 1 by more than two lengths it was granted.

“On the way to races I said to Billy (Heads), my partner, one thing I wish is you and me to be in the photo with the winning horse so we can put it on the wall,” Luzumova said.

“I sort of just said it, but I really didn’t think much of it.”

Despite those sound efforts, Luzumova did not get ahead of herself and think getting her winning photo would become a reality.

“Because I train him on the grass I thought he could go alright.”

“But I didn’t expect him to win like that.”

Danangus Fella is the only horse Luzumova has in work at the Kurow racecourse.

“It is a lovely track, one of the best grass tracks around I would say.”

Luzumova came to New Zealand in 2002 and has spent much of her time since working with harness horses.

She knows Danangus Fella’s breed well, having had a lot to do with his half-sister, Spotlight The Valley.

“I have helped Robert Wilson a lot in the past.”

“Spotlight The Valley is Danangus Fella’s half-sister and I had a lot to do with her.”

Before coming to New Zealand Luzumova had mostly worked with endurance horses.

“It was more Arabians and endurance horses then.”

“I have done a lot of endurance riding and I have got a stallion at home.”

“I had a couple of rides last year, but I have been more focused on the harness this year.”

Orange made full use of the 20m head-start the Paul Kerr trained pacer had over the favourite Di Caprio by taking William Wallace to an early lead.

Di Caprio came around and took the front within the final lap of the 2810m feature, before William Wallace ran him down in the straight to win by almost two lengths.

Orange completed his winning treble by taking out the Lochie Marshall Memorial Trot behind the Ken Barron trained Majestic Hurricane.