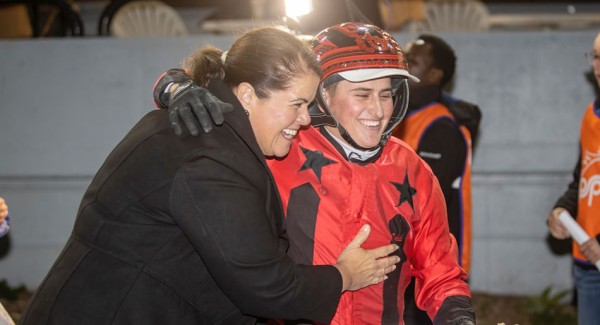 Not only did the injury-plagued seven-year-old return from retirement to win, but he gave popular former Kiwi driver Luke Whittaker his first Group 1 victory.

The 22-year-old Whittaker, a former leading Christchurch junior driver, celebrated a lavish victory wave, which was as much a “thank you” to trainer Shannon Price.

“This is something special. To do it for Shannon (Price) and Scott (Miller), who have been like family to me over the past five years … they’ve taken me in and given me plenty of opportunities.

Price defied veterinary advice to nurse Wee Man Trouble back from six months in retirement to win at the highest level.

“He was retired for six months and the vet said he’d never seen a horse come back from the injury he had.”

Wee Man Trouble was a $16 shot and overpowered a gallant former Kiwi, Matt Craven’s Credit Master, to win by 1.9m in a slick 1min57.4sec mile rate for 2138m.

The first four home were former Kiwis with Majestic Harry third and Doff Your Cap fourth.

It was a quinella for Team McCarthy and their former Kiwi mares Fairy Tinkerbell and The Honey Queen in last night’s feature mares’ race, the Queen of Hearts at Albion Park.

The race changed early when favourite Maajida was easily crossed at the start by The Honey Queen, who then immediately took a trail on Fairy Tinkerbell.

“She’s a lovely mare who gives her absolute all,” co-trainer Luke McCarthy said. “She’s one of those horses who gets the absolute best out of herself.”

While many expected her to lead from gate two, Nathan Purdon’s filly was easily crossed at start before driver Chris Alford found a trail in the running line.

Amore Vita chased hard down the back straight, loomed at the winner on the home bend, but couldn’t hold-off the booming late finish of Emma Stewart’s much-improved Courage Under Fire fily Soho Historia, who swept to a 1.4m win in a 1min55.3sec mile rate.

“This filly is a huge credit to Emma and Clayton (Tonkin),” driver Mark Pitt said. “She’s come from nowhere and to sprint from as far back as she was tonight and beat that sort of field was something else.”

Soho Historia won just one of her first nine starts before being transferred to Stewart and Tonkin where she is unbeaten six starts and now a Group 1 winner.

Mighty three-year-old Leap To Fame underlined his enormous potential when he simply outstayed his rivals to win a brutally run Group 1 Queensland Derby.

It gave Grant Dixon’s stable star the NSW/Queensland Derby double and his next main target is the Victoria Derby at Melton in October.

To do the work Leap To Fame did last night, from an awful draw and parked outside the leader, was simply phenomenal.

And just when classy former Kiwi pacer Cantfindabettorman emerged from a lovely soft trail to challenge around the final bend, Leap To Fame found another gear for Dixon.

The 1min54.9sec mile rate on a rain-impacted track was only 1.2sec outside Colt Thirty One’s all-aged track record.

“When you’re the horse to beat like him, they’re all looking out for you which makes it harder,” Dixon said.

“He’s a special horse. Kevin and Kay (Seymour) were good enough to let us give him a bit of a break after the NSW Derby knowing the big season ahead.”

The Seymours turned down huge offers, some reported to be above $1 million, for Leap To Fame after his NSW Derby win.

He’s now Australia’s top three-year-old seed, but with much interest focusing on how Catch A Wave returns from a spell for Andy and Kate Gath in Victoria in coming months.

Brilliant four-year-old Bettor Isolate showed he could be one of the “finds” of the Queensland Carnival with another sparkling win in the Group 3 JC McMullen at Albion Park last night.

Trainer-driver Matty Craven has a proud strike rate and history in recent years at Albion Park and the untapped Bettor Isolate added to it.

He’s won five of his six runs back from a year out with injury and shows all the attributes of a major race playing in the making.

There is just something seriously exciting about Honolua Bay.

The brilliant son of Somebeachsomewhere kick-started a campaign aimed at the Victoria Cup and Inter Dominion with a sparkling first-up win in the Popular Alm Sprint (1690m) at Kilmore last night.

Best known for his speed as a sit-sprinter or leader, Honolua Bay had to sit parked and still proved far too good.

Stand-in driver Nathan Jack nursed him as along as possible before going for home on the final bend and then holding-off a gallant Bettor Be The Bomb in the closing stages in a slick 1min53.4sec mile rate.

The time equaled the track record.

“He had a quarter crack after winning the Vicbred final last New Year’s Eve, that’s why he’s been out so long,” owner-breeder Bill Anderson said.

“We’ve got a huge opinion of him and Emma (Stewart) and Clayton (Tonkin) have been so happy with him this time back.”

Honolua Bay’s win was his sixth on end and took his record to 15 wins from just 22 starts.

The October 8 Victoria Cup night could be a huge one for Bill and Anne Anderson.

It also looms as the return date for their champion mare Ladies In Red in the Make Mine Cullen, the first leg of the Victorian mares’ triple crown series.

“She got home last Wednesday and is having a bit of a break now. She had those extra days up in Queensland after winning the Rising Sun while we waited for a flight to get her back home,” Anderson said.

Chris Lang knows what a good trotter is and he looks to have his next potential topliner in Ollivici.

The four-year-old has a strong Kiwi connection being by Orlando Vici out of former classy Kiwi mare Belle Galleon.

Ollivici continued his rapid rise with a dominant all-the-way win in a heat of the Winter Trotters’ Cup series at Kilmore last night.

He is unbeaten in two runs this campaign and boasts six wins and three seconds from just 13 starts.