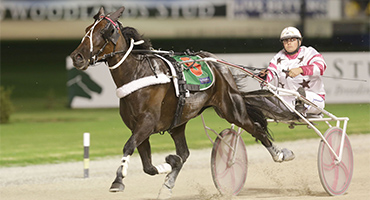 While the lockdown was “almost business as usual” for trainer Megan Teaz, the demise of all racing domestically did have an immediate impact on her race-calling husband Jason.

“Having our own private training track was a huge assist meaning we were still able to earn an income after Jason’s Trackside committments ended,” says Megan. During Alert Level 4 they carried on breaking in and educating a team of 10 at their Ohaupo property in the Waikato.

“With the racehorses rejoining the team and the breakers and 2yos heading for winter breaks we are currently working 13 of the 30 we have on the books.”

Raceday, Megan says, can’t come soon enough. They will have five starters at Cambridge on May 31.

“Of the 5 Hawthornden Hunk would be the best on ability but he can be frustrating and he’s very green and can be a bit ignorant. If he was to show his best he would win.” He’s had a second and a third in six starts

The stable’s last winner was Panspacificjet at Stratford in February. Megan says : “he’s enjoyed an easy 3 weeks and unlike some of the others the lockdown came at a good time. He’s only a three year old and weighs 530kg and as he gets older he will continue to improve.”

Super Actor is set to debut from the stable. With five placings in 18 starts he was trained previously by Ross Paynter. “His work has been very good and seems a happy horse.”

A month away from racing is Hezashadowplaya – “His 4th on debut was very good and will win a few races.”

Two-race winner Armed Reactor is back jogging after 5 months off. Megan says “he went for a spell after flopping a few times after winning impressively, although rising 6 he grew significantly during his spell and his poor performances can be attributed to growing pains.”

The future looks bright too with a number of juveniles shaping up nicely.

“We have a good batch of youngsters with a two year old by Wishing Stone called Wishing Star who would have qualified this season had there been later two year old races.

Love And Faith and Ultimate Moment are already qualified as two year olds this year and will make nice three year olds. Of the yearlings we broke in a Majestic Son filly called Emma Joy was a standout.”